"First Lady Michelle Obama shook her head from side to side..."

After this guy heckled her husband ...

I was shocked and appalled when someone shouted "You Lie" during Obama's speech.

The AP released this about 10 minutes after the speech:

Obama heckled by GOP during speech to Congress

WASHINGTON — The nastiness of August reached from the nation's town halls into the U.S. Capitol on Wednesday as President Barack Obama tried to move his health care plan forward.
South Carolina Republican Rep. Joe Wilson shouted "You lie!" after Obama had talked about illegal immigrants.

It wasn't the only interruption during Obama's speech to a joint session of Congress in the House of Representatives. Earlier, Republicans laughed when Obama acknowledged that there are still significant details to be worked out before a health overhaul can be passed.Wilson's outburst caused Obama to pause briefly before he went on with his speech. Overhead in the visitors' gallery, first Lady Michelle Obama shook her head from side to side.

As usual, Media Matters for America was on it and corrected the charge:

The Huffington Post also has something about the outburst and posted a photo: 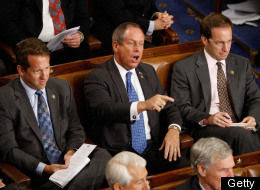 Personally, I think Cong. Wilson should hear from you:

You can write to Rep. Wilson:

Copy of letter I sent:

Rep. Wilson; Your behavior during President Obama's health care speech was atrocious. When you shouted "You lie" you embarrassed yourself and your constituents. You ought to be ashamed and I sincerely hope you are roundly censured and widely criticized by members of the legislature, the media and citizens of the United States. You crossed all boundaries of protocol.

Posted by http://sylvesterbrownjr.blogspot.com/ at 10:07 PM No comments: