The Power of Powerful Images 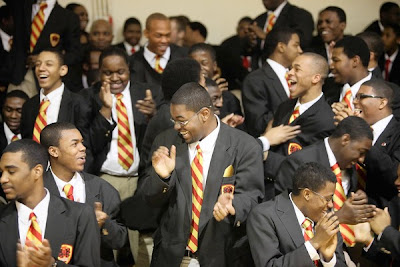 This photo from the Chicago Tribune posted on Tom Burrell's "Stop the Brainwash" website speaks to the power of positive images that he outlines in his book; Brainwashed: Challenging the Myth of Black Superiority.

Read more here: The POWER OF POWERFUL IMAGES
Posted by http://sylvesterbrownjr.blogspot.com/ at 1:40 PM No comments: 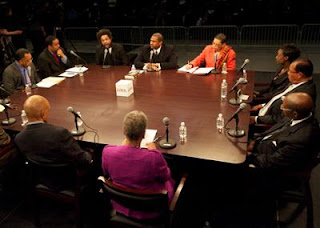 Security forces at Tavis Smiley’s March 20th “black agenda” debate at Chicago State University were intense. No-nonsense policemen and men and women with the Nation of Islam (NOI) directed traffic, checked purses and electronically scanned bodies at the entrance of the university’s convocation center. NOI security personnel circled the stage where their leader, Minister Louis Farrakhan, and 11 other high profile black panelists joined author and PBS commentator Smiley for a dramatic discussion about a black agenda in the Obama era.

The presence of the NOI defense team was just part of a stream of contradictions that, for me, summarized the entire event. Never before have I witnessed so many disciplined, self-determined, eloquent and powerful black people who failed to recognize their own muscle. Never would I have expected high-profile panelists to validate a collective prescription for powerlessness. Proclamations of “love” and protection for a beloved leader were intertwined with denunciations of Obama’s leadership. These divergent positions, if declared with enough pizzazz and spiritual timbre, were rewarded with standing ovations and thunderous applause.

While the rest of the country waited with baited breath as Obama’s health reform plan inched its way into the history books, more than 5,000 people gathered in Chicago for a glorified gripe session. Star-struck attendees may have enjoyed an emotion-laden event but they left strategically emasculated and woefully agenda-less.

April Lewis, a 30-year-old Chicago State student, told the Chicago Tribune that she was treated to an "Obama-bashing event" instead of receiving answers about health care reform or the recession: "I wanted them to focus on issues in Congress and what our community needs to do to help the president get things done. I wanted to hear more answers and solutions."

In an interview with The Root, Tracey Bruno, who lives in the western suburbs of Chicago, shared Lewis’ concern: "When you have these panel discussions, there is nothing concrete, like you can do A, B, C and D. Everybody talks about what's going on and the things that aren't working, but what can we do? What can the everyday person do?”

Most of the panelist, which included Bennett College President Julianne Malveaux,

Rev. Jesse L. Jackson Sr., scholar Ronald Walters and professors Cornel West and Michael Eric Dyson focused on Obama and “the things that aren't working.” Unfortunately, they pontificated to the choir. Blacks already know they have been disproportionately crippled by the recession. They are familiar with the white power structure surrounding Obama. They didn’t need reminders about the vociferous Tea Party movement, the Right wing demonization of Obama or the racial rhetoric fueling assassination threats. Everyday people, who have to tone down their “blackness” in the workplace, understand the limitations of a “black face in a high place.” 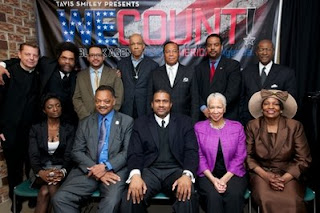 More time was spent by the intellectual group defending the need for a black agenda symposium than was dedicated to defining and implementing an agenda. This was unfortunate considering the influence of the panelists. Smiley, who has promoted The Covenant With Black America book series, helped develop a data-based template supposedly designed to tackle economic disparity and reverse racial disparities in healthcare, housing and education. Surely, esteemed author and commentator Malveaux, with a Ph.D. in Economics, could help draft a fiscally-responsible black agenda that compliments and expands federal urban programs. As I observed the NOI soldiers, I imagined the black men interacting with at-risk youth. Long before Malcolm Little became Malcolm X, the organization specialized in retrieving lost souls from America’s prison system. There must be a way to incorporate the NOI’s strategies that stress entrepreneurship, responsibility and fatherhood (sans religious conversion), into a national urban agenda that addresses crime prevention and prison recidivism.

Smattered within the revival session where sparse affirmations of a do-for-self –with-a little-help black movement: “How long are we going to sit around begging white folks to do for us?” Farrakhan asked. “We have been looking to the wrong people to fulfill the agenda.”

Tom Burrell, author of Brainwashed: Challenging the Myth of Black Inferiority, urged black leaders to break the yolk of “learned helplessness” and remind blacks that they’ve overcome great obstacles and have all they need to change their own lives and communities.

Angela Glover Blackwell, whose nonprofit organization, PolicyLink, has partnered with Smiley on the Covenant books and accompanying website, reminded the host that the Obama Administration has indeed responded to their agenda. “What is our job?” she asked Smiley.

In response, Dyson asked why the Obama administration was so “undercover” about its outreach to blacks. “Everything you mentioned has not been targeted to black people,” he added.

The statement underscores the dire mission of black leaders. We’ve spent centuries accessing the collateral damage of racism, decades screaming for opportunities for the disenfranchised and recent months debating what Obama should, could or must do for blacks. Now, more than ever, the choir, “everyday people” need answers and solutions.

Next month, the Rev. Al Sharpton will host another “black agenda” forum. By then, Smiley’s symposium would have been televised on C-SPAN. Hopefully, the next forum will be orchestrated in a way that rises above just another prolonged, high-profile gripe fest.

During Smiley’s event, panelist Dr. Ronald Walters warned that we have “talked too much about Obama.” I agree. These are wonderful yet antagonistic times. Nothing is promised. Despite growing opposition, a window of opportunity for dramatic social change is still open.

We have talked enough. We have an agenda. Black leaders can provide the missing components: galvanize the vision and use their talents and influence to promote an A, B, C and D plan of action that excites everyday people into a decisive and immediate mode of action.

Sylvester Brown. Jr. is a St. Louis-based writer and a former columnist for the St. Louis Post-Dispatch. Brown is currently focusing on government, nonprofit and other efforts to revitalize urban communities through innovative social initiatives and grassroots activism.

Posted by http://sylvesterbrownjr.blogspot.com/ at 2:32 AM No comments: