This from TPM Live Wire:

Daily Show correspondent Lewis Black was surprised last night that Glenn Beck had criticized those who have compared Arizona's immigration law to Nazi Germany. "This is a guy," said Black, "who uses more swastika props and video of the Nuremberg rallies than The History Channel."

Posted by http://sylvesterbrownjr.blogspot.com/ at 7:04 PM 2 comments: Links to this post

During her appearance at the National Tea Party Convention in February, undeclared 2012 presidential candidate Sarah Palin asked the crowd; “How’s that hopey-changey thing working out for ya?" 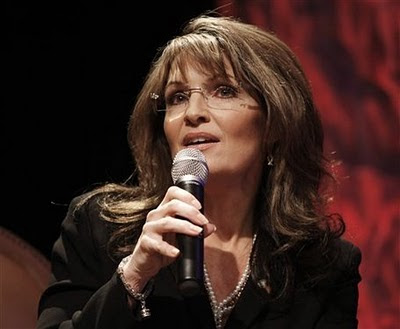 Well, Ms. Palin, according to the Bureau of Labor Statistics, the 15 months or so of "hope and change" is looking pretty good for many Americans. According to the latest federal labor report things are looking better than expected on the job front.

In April, more confident employers expanded payrolls the most in four years by 290,000. The government hired some 66,000 temporary census workers but the really good news is that employers in the private sector -- you know "the backbone of the economy" -- added an impressive 231,000 new positions last month, the most in new job position since March 2006, according to the Labor Department. And, as the Washington Monthly noted in "AT LONG LAST, U.S. JOB MARKET STARTS TO LOOK PRETTY GOOD," the jobless rate rose to 9.9 percent as people streamed back into the market looking for work.

Now to the folks who still believe Obama is the Socialist-leaning, Muslim Son of Satan , this job growth news probably won't excite you. However, for the rest of us, his administration has been a welcomed change from the past 2-terms of fear-based war mongering, massive job loss, economic devastation and stifled innovation.

With more than 8 million jobs lost during the course of the recession, the president said there is still much more work to do. A few days ago, on the White House lawn Obama said the "difficult and at times unpopular steps we've taken over the past year are making a difference." Obama gave his word that he would "keep fighting every single day to create jobs and opportunities. We're not going to rest until we put this difficult chapter behind us." 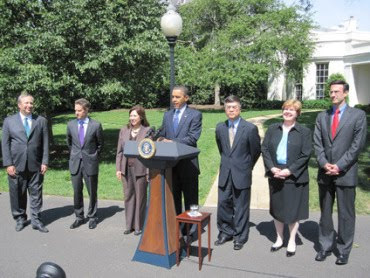 Call me a doe-eyed optimist, Ms. Palin, but I'm gonna pass on the toxic doses of paranoid divisive tea you and your followers swallow daily. I'll quench my thrist with liberal amounts of job growth news, innovative and concerted action and other benefits associated with that so-called "hopey-changey" thingy you scrawled on your palm. 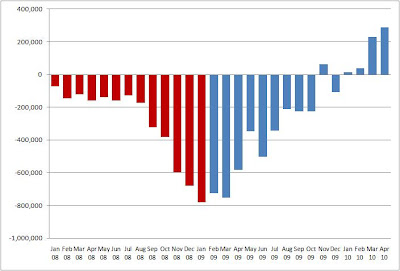 Note: The chart has changed slightly from last month, in part to reflect revised numbers from February and March, and also because The Bureau of Labor Statistics recalculated all of 2009's numbers earlier this year.
Posted by http://sylvesterbrownjr.blogspot.com/ at 7:12 AM No comments: Links to this post