No apologies Necessary: Bush Didn’t Care and Neither Did the Media 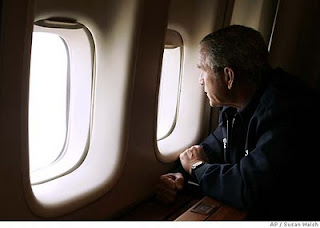 When Lauer asked about West’s "George Bush doesn't care about black people" remark, Bush said: "It was one of the most disgusting moments in my presidency. He called me a racist… I didn't appreciate it then. I don't appreciate it now. " 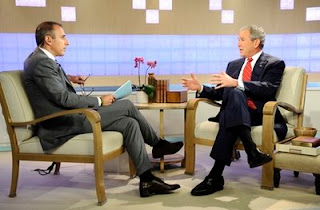 Lauer tried to interject that West actually said he “didn’t care about black people,” but Bush interrupted, insisting the entertainer had still called him a racist.

Just as he did during the march-up to the Iraq invasion, Bush used faulty information to set the tone and the media followed his lead. Once he played the race card, Lauer retreated from the subject and the Internet tag lines were “Kanye,” “racist” and “apology.”

How would Bush have responded if Lauer had mentioned that he didn’t show up in the hurricane stricken area until five days after insurmountable death and destruction had been wrought? Would Bush have been so resolute in his response had Lauer flashed photos of him, on vacation, having a good time, while people waiting for rescue had perished? 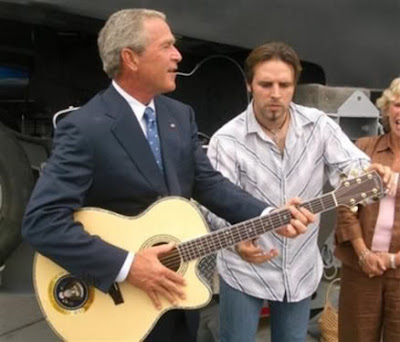 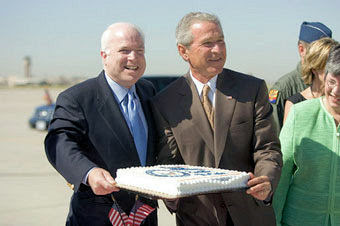 On Monday, August 29, 2005, levees in New Orleans breached after Hurricane Katrina came ashore. The next day, 80 percent of the city was submerged in water. Juxtaposed against news photos of scrambling, drowning Hurricane victims, there was Bush, playfully strumming a guitar (a gift from country singer Mark Willis) and celebrating Senator John McCain's 69th birthday. The politicians shared cake.

What if Lauer had applied a little journalistic fortitude, shown those pictures and then said: “Mr. Bush, it certainly looks like you didn’t care about black people.”

The stubborn Texan would have probably given the same retort: “… it was a disgusting moment, pure and simple." Still, Lauer would have at least challenged the defiant attitude and perhaps added depth to the media’s follow-up headlines and talking points.

Who knows, if Lauer had appropriately framed the discussion, Kanye West might have reserved his apology to Bush. Considering the governments’ molasses-like response and the images of Bush having a grand, ole-time while tragedy swelled, West’s impromptu insult warrants no apologies, in my book.

If we’re to be totally honest, Bush wasn’t the only one who seemed not to care. Other government officials, news anchors and millions of Americans adopted the same laissez-faire attitude about black New Orleans victims who were instantly transformed into violent, raging, out-of-control “refugees.”

Ask any American if they “care about black people” and I’d wager 95.5 percent would say something like; “Yes, of course. I care about all people.”

But ask those same people if they care about “black looters, black rioters or black rapists” and that positive percentage would, no doubt, dramatically plummet.
Thus was the way the media portrayed black Katrina victims.

We now know that the deluge of media reports describing murder, rape and violence during the catastrophe, including Mayor Ray Nagin’s claim of “hooligans killing people and raping people" were grossly overstated, outright inaccuracies and panic-fueled rumors.

Days after the U.S. invaded Iraq, the secretary of defense held news conferences bragging about "temporary military bridges" they'd built and the tons of food and water the U.S. had delivered to Iraqi civilians. Why couldn’t a caring government have swiftly implemented those same life-saving endeavors on its own turf?

During this emergency backdrop, Louisiana Gov. Kathleen Blanco went on TV boasting about the arrival of National Guardsmen. Their M-16s are "locked and loaded,” Blanco brayed, “they know how to kill; they are more than willing to kill, and they will kill.”

While looking at a historical city synonymous with jazz, blues and Mardi Gras laid waste; while watching starving babies, floating bodies, corpses in the street, families stuck on rooftops and thousands of thirsty, hungry, desperate, displaced people – the media and much of the American public were stuck on stereotypes and skin color.
A governor called for blood. A president ate cake and strummed a guitar.

These were the “most disgusting moments” of George Bush’s presidency.

If anything, it is Bush who owes the victims of Hurricane Katrina a sincere and humble apology.
Posted by http://sylvesterbrownjr.blogspot.com/ at 6:15 PM 2 comments: Links to this post