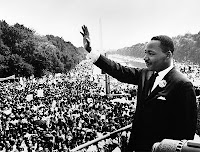 Imagine the 2008 presidential campaign as a Hollywood production. Barack Obama was cast as Martin Luther King Jr. incarnate -- healer of our collective wounds, symbol of racial progress and equality ... the embodiment of "the Dream."

The "feel good" movie served as epilogue to the tenuous civil rights movement. Electing an African-American president based on "content of character," not color of skin, signaled the dawn of a post-racial society. With King reincarnated occupying the White House, America was absolved of any need to address historic race-based social and economic ills.

Unfortunately, the script was based on an abridged version of King's legacy. Obama was reduced to a sound bite from one historic speech. His coronation should have been a reminder that much more work is to to be done in the arenas of justice and equality. We would have found no room for contentment with the election if we had recalled King's messages delivered in his 1967 "Where Do We Go From Here" speech:

"Let us be dissatisfied until the tragic walls that separate the outer city of wealth and comfort and the inner city of poverty and despair shall be crushed by the battering rams of the forces of justice."

We should be uneasy, King continued, "until slums are cast into the junk heaps of history" and justice rolls down "like waters and righteousness like a mighty stream."

With black and brown people suffering disproportionate rates of poverty, unemployment and prison incarceration, with justice flowing like chilled molasses in poor neighborhoods, now is not the time for us to assume a stance of satisfaction.

King understood that it would take decades to even the playing field between blacks and whites. He used the analogy of a foot race to illustrate this point. If blacks came to the starting line 300 years after whites, King said, they "would have to perform some impossible feat in order to catch up with his fellow runner."

Forty three years after his assassination, black and brown people are still playing catch up.

King was no pie-in-the-sky dreamer. He doggedly insisted that poverty had to be eradicated for America to live up to the Founding Fathers' creed. He did not hesitate to stress that those denied the promise of opportunity based on skin color needed special redress.

In a 1965 Playboy magazine interview with Alex Haley, King outlined specific methods to empower poor people. He called for a $50 billion federal aid program that included business loans, housing assistance, job training and public works projects in disadvantaged communities. "With such a massive government program," King said, a "genuine and dramatic transformation could be achieved in the conditions of Negro life in America."

Before America chose government assistance as the route to uplift the poor, King called for a do-for-self approach. And he was wise enough to stress that the program not be aimed at blacks only but at the nation's poor and disenfranchised.

Still, such an investment, King argued, would help blacks to rebuild their neighborhoods and would lead to a "spectacular decline in school dropouts, family breakups, crime rates, illegitimacy, swollen relief rolls, rioting and other social evils."

Before America chose government assistance as
the route to uplift the poor, King called for a do-for-self approach.

As polls have indicated, most whites believe that blacks, like Obama, have every opportunity to succeed in this country. There is little tolerance for race-specific government aid and even less support for reparations that compensate blacks for historical injustices. Even with these sentiments, I maintain that a federal program to empower the disenfranchised to do-for-self can be sold to most Americans.

There is no need to cast aspersions on Obama. The country was in need of a symbol of racial progress and equality. The election of a black man fit the criteria. Besides, Obama has always maintained that he cannot enact "change" all by himself.

Obama was not the conclusion of the civil rights movement. He is a point on a continuum. As we observe and honor King's legacy, it is fitting that we move beyond symbolism and return to the task of eradicating poverty and providing recourses that empower the poor and disenfranchised to reclaim their communities, lives and destinies.

It is time for another, more realistic production. This time, Obama isn't the lead. In this adaption "we the people" are the ensemble cast committed to finishing "the Dream."

Sylvester Brown Jr. is a freelance writer and founder of "When We Dream Together" -- a social agency focusing on the creation of self-sustaining, revitalized urban communities. To reach voices authors, contact Beacon features and commentary editor Donna Korando.

Posted by http://sylvesterbrownjr.blogspot.com/ at 11:38 AM No comments: Links to this post