A Do-for-self Project We Can Do Ourselves 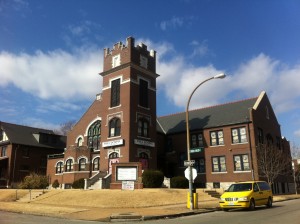 In collaboration with the Acts Partnership, a community-based development organization (CBDO), the alderman wants to purchase a vacant, historic church in the O’Fallon neighborhood on the corner Red Bud and Rosalie Streets. French has issued an urgent call to raise $15,000 to purchase the church. The Incarnate Word Foundation has agreed to match the donations.

"If you can donate $50 today, French wrote, "The Incarnate Word Foundation will match your donation with another $50."

Recently, I established When We Dream Together, a nonprofit dedicated to delivering the information and resources to help ordinary people enact extraordinary change in long-ignored urban areas. Part of our mandate is to encourage participation in projects and initiatives that African Americans can do themselves, without government or corporate support.

This project, in its initial stage, offers such an opportunity. The church is just a block away from O’Fallon Park where French has hosted a number of outdoor concerts within the past two years. The concerts have reinforced a sense of community and helps alter the image of an area singularly tagged for criminal activity. French and the Acts Partnership want to turn the church into a community center -- a hub for positive community interaction.

I'm not trying to co-opt the project but from my conversations with French, I have a pretty good take on his vision. It's a do-for-self vision. With our support and matching donations from Incarnate word, the church can be purchased and WE can help turn it into a mechanism for holistic inner-city change.

On Sunday, I wrote about the need to put wayward youth to work this summer. Perhaps this is the project where former gang members can work alongside caring adults and professional volunteers. Imagine the sense of dignity and ownership if youth rehabbed the building and helped build a powerful institution in their own neighborhood. Maybe French could use his clout to secure a few neighboring vacant lots that can be turned into community gardens. Kids and adults can grow badly needed, nutritious food that can be sold in the neighborhood. While they earn, they can learn. I don't think French would turn away folks who want to offer computer training classes or programs in the building that address violence, low self-esteem, childhood obesity, physical fitness, business development and other community woes and needs.

The point is, this project provides an opportunity to educate and care for kids and offers a dignified path to community empowerment. French is doing his part. He's working to add structure, sustainability, safety and community in a disadvantaged area in need of serious uplift.

Let's help him out. If we dream and work collectively, we can raise the $15,000 and, along the way, develop a new paradigm for urban redevelopment in our city.

To donate and more information click here.
Posted by http://sylvesterbrownjr.blogspot.com/ at 11:36 PM No comments:

The staggering numbers stayed with me long after leaving the “Call-to-Action!” youth violence forum at Vashon High School yesterday:

• 144 homicides in the city last year. An average of 3,000 homicides within the past 20 years with another 23,000 wounded in gun-related incidents in the same time frame.﻿﻿﻿﻿﻿﻿﻿﻿﻿﻿﻿﻿﻿
﻿﻿﻿
﻿﻿﻿
﻿﻿﻿﻿﻿﻿﻿﻿﻿﻿﻿﻿The forum, hosted by Washington Tabernacle M.B. Church, was convened to answer a question: “What role can the churches and faith community play in bringing about solutions to the problem of youth violence?” Panelists included 5th Ward Alderwoman April Ford-Griffin, St. Louis Chief of Police Daniel Isom, SLPS Superintendent Kelvin Adams, the Rev. Dietra Wise, Chaplin of the Juvenile Detention Center, St. John’s United Church of Christ’ Pastor Starsky Wilson, Father Rick Potts of St. Alphonsus “the Rock” Catholic Church and Cedric Clarkson, the executive director of the faith-based “Call To Oneness” organization.

Overwhelmingly, panelists insisted that ministers and their congregations must “come out of the church,” intervene, interact and personally get involved with young people. Chaplin Wise told the tale of youth locked in juvenile detention some with no parental or adult visitors. She urged churches to organize mentor groups that would help keep children out of “the system.” On the same note, Alderwoman Griffin asked the church community to “adopt” families and kids trapped in dysfunctional environments. The organization, Big Brothers & Big Sisters, Griffin said, has a long list of North St. Louis kids desperate for adults who will just commit to talking spending time with them.

Other panelists reinforced their arguments with breath-taking figures. Superintendent Adams said he has no choice but allocate $25 million from his budget for security guards, social workers, counselors, nurses and “extra staff” just to deal with the issue of youth violence.

Although his department arrested 28,000 people in 2010 for "minor and serious crimes," Chief Isom said that 40 percent of black males between the ages of 21 and 25 will be re-arrested within the next two years. The figures, Isom stressed, are based on Justice Department estimates.

The event's MC, Flint Fowler, president of Mathews-Dickey’s Boys' & Girls' Club, underscored society’s misplaced priorities by comparing the cost of a child served by his agency in one year ($1,100) with the annual incarceration rate of $50,000 per prisoner, per year.

Community collaborations, focused resources, aid and support to families trapped in the paradigms of poverty and holding everyone -- including parents -- accountable were offered as remedies to stem youth violence.

For me, the forum underscored the urgency to coalesce and address our regional problems differently. Absent from the stage were the mayor, the county executive, heads of the city’s elite corporations, agencies that have received federal dollars to bring “green” and other major initiatives and developments to the urban core. This is not to say that these people aren’t playing roles in addressing societal ills plaguing our region. But it is an indication that collaborations between powerful individuals and agencies and the grassroots groups and ordinary people in depressed areas are still nonexistent.

I left the forum informed but malnourished. With more than 1,000 churches in our midst, I expected the announcement of a major jobs program for troubled youth or a church-led mentoring movement. Surely, we can gather the flock, pool our resources and tap into city, state, private and nonprofit resources to keep a few hundred kids off the street and positively engaged this summer.

This is not a put down of the “Call to Action” forum. Quite the contrary. In order to have collaborative action we must first articulate the need and outline a course to inclusive and effective collaborations.

Still, we must also avoid “talking too much,” as Superintendent Adams noted. The money we spend on incarceration, addressing youth violence is staggering. The young lives and human potential we lose each year is immoral. We know the problem, we can find the resources and there’s a potential army of soldiers sitting in churches every Sunday. What’s missing is a strategic approach that aligns inner-city development and public/private resources with faith-based activism and community-wide engagement.

When we dream and work collaboratively, we send a message that there’s a shift in our collective priorities. We set a course toward reclaiming wayward youth, revitalizing disadvantaged neighborhoods and re-imagining our region.

Washington Tabernacle M.B. Church has invited other churches and individuals to answer the “Call to Action.” For more information call the church at (314) 533-8763 or send an email to: ad_here2serve@sbcglobal.net
Posted by http://sylvesterbrownjr.blogspot.com/ at 8:33 AM No comments: