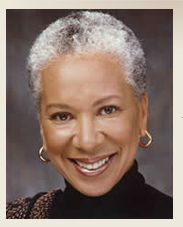 By Sylvester Brown Jr., special to the Beacon

Angela Glover Blackwell, founder and chief executive officer of the national research and action agency, PolicyLink, has been fighting for equity in America for the past three decades. Last year, when President Barack Obama hosted a round table meeting to discuss his $50 billion infrastructure proposal, Glover Blackwell was the only public-interest advocate among the gathering of governors, mayors, labor leaders and four former transportation secretaries.

Glover Blackwell, a St. Louis native, has become a leading voice for the voiceless -- low-income people and people of color. Last week, she spoke at the symposium, "Housing: Building a New Foundation for Economic Prosperity," hosted by Focus St. Louis. The conference geared toward developers, policy-makers, local government representatives, grassroots groups and others involved in housing, including affordable housing, in Missouri and southwest Illinois.

Local journalist, Sylvester Brown, Jr., sat down with Glover Blackwell moments before she delivered her address at the Millennium Hotel in downtown St. Louis to discuss proposed cuts in Obama's 2012 budget, mean-spirited politics and revitalizing low-income communities. This interview has been edited for length and clarity.


You've been on this path a long time. Obama, whom you support, is in office, but you still don't have the change that you've worked for all these years. Are you disenchanted?

Angela Glover Blackwell: I'm not going to be disenchanted. I refuse to go there. I do get disappointed though. I am disappointed that America keeps missing its moment. Missing moments is something we keep doing again and again. I'll give you three examples.

We missed the moment in 1954 with Brown vs. the Board of Education. If we had gotten on a different path, we'd be telling a different story about urban and metropolitan areas today. We missed the moment after 9/11 when [President] George W. Bush used a word, and I was surprised because I hadn't heard it in so long. He used the word "united." We missed that moment. We went right back to business as usual. We went back to separate camps, back to being small-minded.

Then we elected Barack Obama, the first African-American president of the United States. I was in New York the day Obama was elected. When I walked out onto the streets that morning, there was a difference. People were just smiling at each other; we had done something as a nation. New York is probably more liberal than the rest of the nation, but I think all of America -- and I heard it on the news -- people who had not voted for him said they were proud the nation had taken that step.

Rather than going forward we went right back to being small-minded. The economy turned out to be worse than anybody thought and when you have bad economic times, people get scared and start looking for enemies. Those of us who were so happy he got in and worked to put him there, underestimated how quickly the right would organize. I mean when you think about what the tea party has been able to do in two short years, it is stunning.

So, I'm disappointed but I'm not disenchanted. I think the issues are on the table and there are a lot of us who see them and if we keep pulling forward, I think we'll go forward.

There are historical patterns of white flight across the nation. Now whites are coming back to urban centers, and many blacks and low-income people fear that they will, once again, be shifted out of communities. How important is it that we consider what communities can be?


Glover Blackwell: It's essential that we re-imagine communities and that we get over the divide that race has created in this city and in this nation.
In some ways this conversation is all about race and in some ways, it's not about race at all. It's all about race because it was our failure to deal with the opportunity to be a racially integrated nation in 1954 with Brown vs. Board of Education and beyond. The failure to embrace integrating the schools and living in integrated neighborhoods caused white flight. Then as the schools and communities went down, it caused middle-class, black flight. It left communities of concentrated poverty. It's no question that momentum had a racial base.

CLICK HERE FOR FULL INTERVIEW:
Posted by http://sylvesterbrownjr.blogspot.com/ at 1:49 PM No comments: