“We can do this!”: Reflections on my Recent Bill Cosby Interview in DC

I remember those words most from the phone conversation I had with comedian/actor/philanthropist Dr. William Cosby in 2005. At the time, I was a Post-Dispatch columnist who’d written about Cosby’s 2004 controversial comments during a 50th anniversary of Brown v. Board of Education even. There, Cosby lit into "the lower economic people"-criticizing the way they dressed, cursed, loitered, committed crimes and their parents who, apparently, failed to raise them correctly.

Long story abbreviated; I wrote that Cosby-as America’s “favorite dad” legitimized the opinions of racists and bigots and validated their stereotypes of poor, black people. As a result of what I wrote, Cosby called me. We discussed the matter, his passions and perspective. I brought him to St. Louis that year. We had a packed house and, thankfully, were able to expand the dialogue.


This past weekend I was flown to Washington DC to be interviewed about my experience with Cosby for a feature-length documentary to be released sometime next year. It was my first time back in DC since 2009 when my visit led to my termination at the Post-Dispatch. At the time, I had no idea that accepting an invitation to a conference (at my own expense, mind you) with international leaders working to build sustainable communities worldwide would be deemed a “violation of ethics.” But, that’s all water under the bridge. I can honestly say, that my ill-timed departure put me on the path to the Sweet Potato Project-a fulfilling effort to empower young, urban entrepreneurs who will lead a movement to establish sustainable, economically-vibrant North St. Louis neighborhoods.

Much-needed perspective was my gift after spending about four hours interviewing with the documentary’s production crew. Renowned comedian, St. Louisan and health guru, Dick Gregory was wrapping up his interview before I started my session. I had interviewed Gregory around the same time I wrote about Cosby’s comments. Gregory had, in fact, introduced Cosby the night he made remarks that set off a national firestorm. He and Cosby have been friends for decades. It was Gregory who, during our May 2004 PD interview, told me I had every right to disagree with his friend, Dr. Cosby:

My disagreements aside, reflecting on my time with Cosby resurrected his unspoken challenge for me to write more, do more, and be more actively involved in the battle to save young people from poverty, prison and early deaths. For more than 25 years, I had been writing about the challenges black people face. But I was just a “talker” when I needed to be more of a “doer.”

When the creator of Fat Albert and Little Bill, “I Spy’s” debonair detective Alexander “Scotty” Scott and the beloved Dr. Heathcliff Huxtable said “we can do this” it was like encouragement from a Grio; a challenge from a respected grandparent, a gauntlet passed from an esteemed elder. It planted a seed of pro-action in me that-eight years later-bloomed into something.

Hours before boarding my flight to Washington, I spent the day at a local holiday event with some of the Sweet Potato Project youth as they sold cookies made from this year’s yield. Away from the daily hustle and bustle and fundraising efforts, I had a chance to reflect and appreciate the progress the North Area Community Development Corporation and I have had in less than two years. 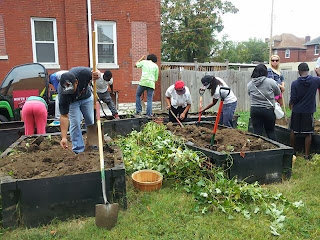 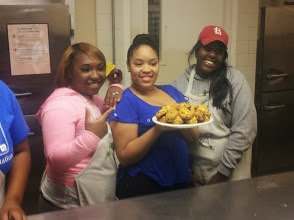 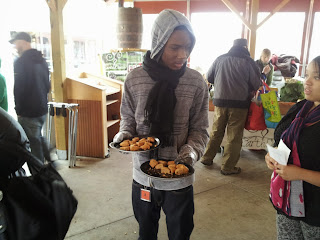 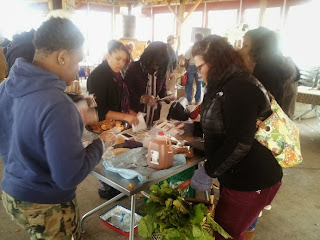 More than 35 teens have been impacted by our program. Even those who have left, gone on to college or have been swallowed up by the distractions of dysfunctional low-income communities now know they have viable, legal options to make money in their own communities. Next year, we’ll recruit 35 more kids. We will secure at least 10 more vacant lots to grow produce. And, through strategic institutional partnerships we will actually be able to create more food-based products and buy produce from residents. Unbelievably, we will begin the empowering process of engaging in economic activity in targeted disadvantaged neighborhoods.

Dick Gregory seemed ecstatic about our program's possibilities. Cosby wasn’t there for the interviews. That’s too bad. I would have loved to have thanked him for the inspiration he gave me back in 2005. I would have shook his hand and said, “Mr. Cosby, you were absolutely right. We can do this.” 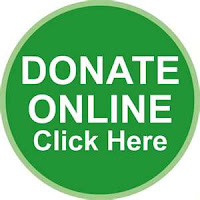 Posted by http://sylvesterbrownjr.blogspot.com/ at 2:38 PM 4 comments: