Listening to "My Kids"

Sweet Potato Project Youth Speak to the Power of Our Program 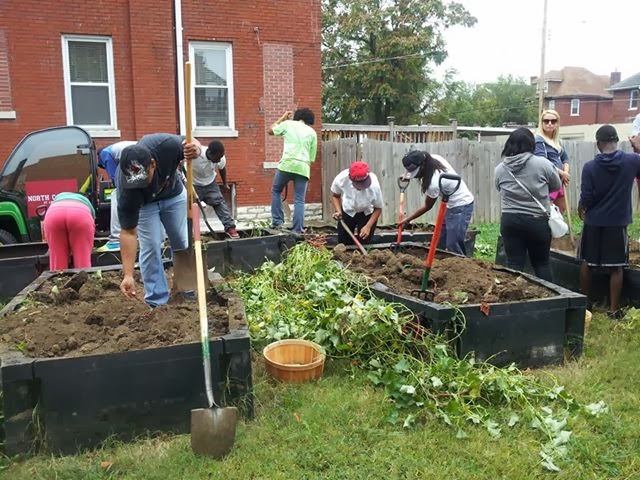 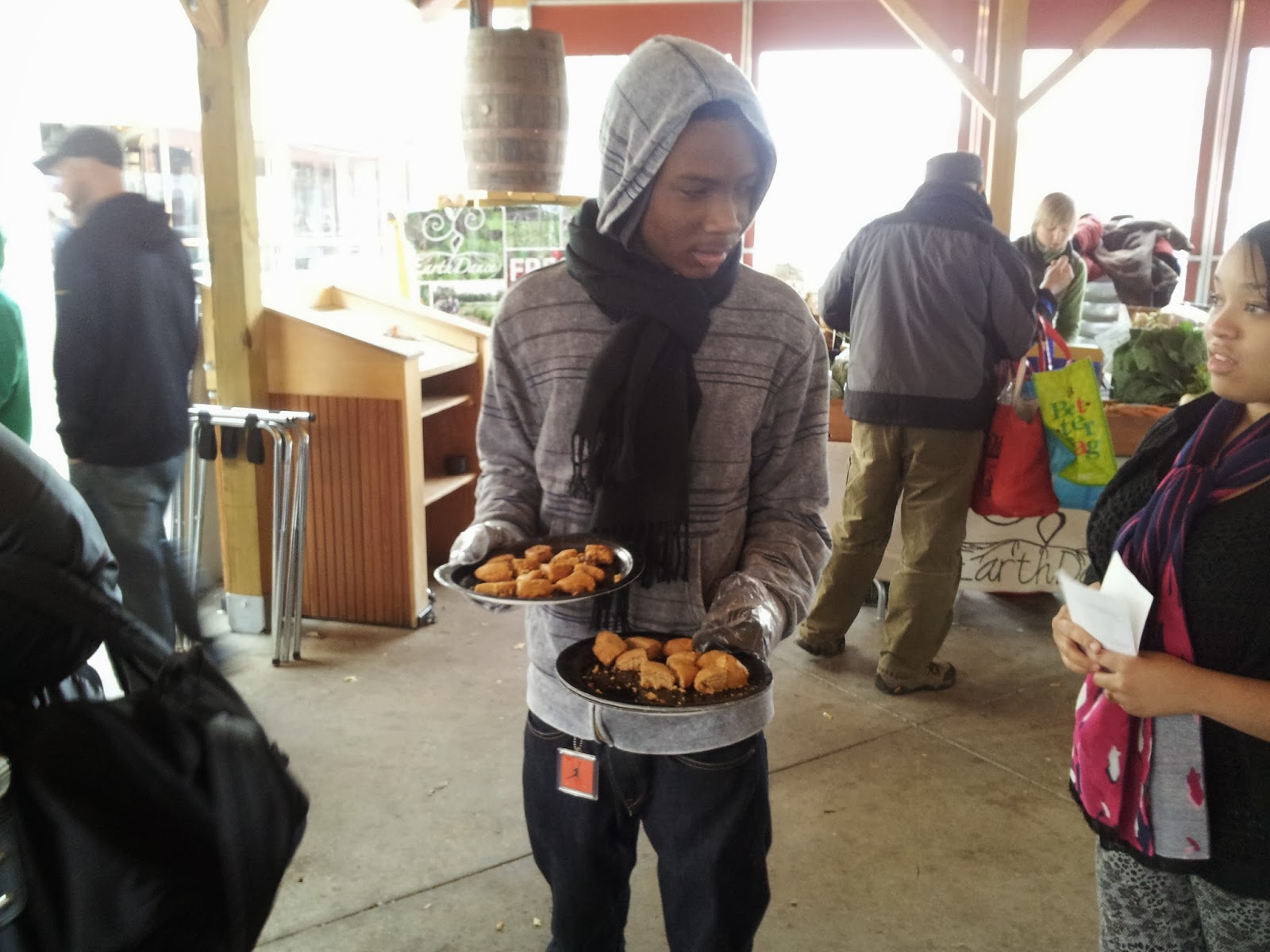 The Sweet Potato Project has a bodacious but very basic mission; we teach inner-city youth that, despite negative perceptions and expectations, they and their neighborhoods have value. As co-founder and director, nothing is more inspiring for me than listening to “my kids” explain what the program means to them:

“The Sweet Potato Project is a program for youth looking for something better than drug-related stuff, breaking into houses, stealing cars or doing something inappropriate that will either leave them dead or in jail,” said Paul Miller (age 20).

“It’s a way to help youth escape bad peer pressure and bad environments; help them regain knowledge of the world around them and learn more about society. We grow sweet potatoes and sell them to our community. We’re basically introducing the community to something new.”

Nadia, Paul and another young man from our program, Keith Young, were interviewed for the Creative Exchange Laboratory’s (CEL) online series “Youth and the City.” They talked about the challenges of growing up around poverty, crime and drug-dealing and their visions for a brighter future. But, as Nadia inferred, we’re introducing the community to the idea that our young people, the ones who are most often denied, dismissed, locked up and locked out, hold the solution for turning around disadvantaged and dysfunctional neighborhoods.

I call them “urban pioneers” because our teens are showing the region that we can indeed grow produce and sell food-based products from “the hood.” What they’re doing on a micro level can be multiplied exponentially to include massive farming, packagingand food manufacturing in North St. Louis. It’s a massive endeavor that requires many individuals and resources. Yet, when I listen to our youth talk about the program, the “impossible” suddenly seems possible.

“This is a real urban youth program,” said Andivar (age 17). “A lot of people can’t get business and management skills for free like we do. I’m really learning how to cook-I've never baked a lot which is a lot of fun.”

Andivar and I talked this past weekend after St. Louis University's Chef Steve Jenkins and Chef Bryan Rogers had us bake an updated version of our cookies. The teens bake and sell chocolate chip and spiced sweet potato cookies-both varieties are made from the produce they plant. We work to show them that there’s opportunity right outside their doors. They don’t need to do destructive things to make money. It’s as simple as selling something grown from dirt.

During our conversation, Andivar noted that our program is designed for any young person, even if they’re on the edge:

“I’d recommend it to anyone with negative habits. A drug dealer for instance has business, marketing and selling skills. So he can use all those skills to run a legitimate business. It’s the same process, just a different product.”

Most of our youth come from neighborhoods where one out of every three black boys are at risk of imprisonment during their lifetime and nine out of ten homicides will involve black youth.  Of the thousands murdered nationwide, half will be black males under the age of 30.  These are more than statistics to Darryeon (age 19), it’s reality. I remember picking him up one day this summer and noticing a detached bumper, broken glass and car parts strewn in front of a light pole across from his apartment. When I asked about the car accident, Darryeon informed me that it was the aftermath of a shooting. Its incidents like this that negatively impacts my students and their peers.

“Growing up in rough neighborhoods, you look around and see crime, vacant buildings and empty lots… it’s a bad thing to see,” Darryeon explained. “You feel helpless and you ask yourself ‘why is there killing in my neighborhood?’”

Darryeon is studying mass communication and video production at Meramec St. Louis Community College. Shy and withdrawn when we first met in 2012, he’s blossomed into one of my most dependable leaders. Darryeon takes great pride in this accomplishment:

“This program helped me build my confidence. I have become a team leader. I've stepped up. It really helps me knowing how far I've come because the skills I’m learning I will use to build my own business someday.”

What’s personally gratifying for me is the sense of accountability that most of our youth adopt. Yes, they like getting paid and earning commissions on sales but they’re developing a sense of ownership that underscores everything we try to teach. They've become emissaries and representatives of something positive in the neighborhood. However, as Andivar notes, this isn't always a good thing:

“A lot of people know me. I go to a public school so when they see me on the website or whatever and then hear me using profanity or something, they act surprised. So now I have to watch what I say and how I act.”

Darryeon is a bit intimidated but he’s embracing the fact that he’ll be a role model for the 2014 freshman Sweet Potato Project class:

This project has been no cake walk. We pay the youth a bi-weekly stipend during the summer and we’re forever short of money for programming and supplies. However, I don’t sugar coat these facts with our youth. They know that this is an under-funded program that they must build and sell to the community.

Again, they’re up to the task:

“I’ve learned that my community not only needs help it needs empowerment,” Nadia said during her CEL interview. “Truly, it’s every man for themselves out here right. But we need young people to understand that they’re not alone and more people can come together to help.”

African American kids think people look at them negatively because of their skin color, Marquita (age 19) says; “That’s the kinda rap that we get.  But what motivates me is when people buy from us and the fact that people are interested in what we do. They go to our website and check us out, they show up to hear us speak and they support us because we’re doing something positive. The feedback really helps. It gives some of us the idea that we’re important.”

African American kids think people look at them negatively because of their skin color. That’s the kinda rap that we get.  - Marquita

With the passage of landmark civil rights legislation, many working class African American families and business owners left black neighborhoods. For at least 50 years, cycles of poverty have left a void that’s been filled with crime, illegal drug usage and sales, imprisonment and early death. Media messaging has convinced "outsiders" and our youth that they come from “bad” neighborhoods; that they must escape if they ever want to make something of their lives. Our goal is to flip that script by empowering a generation of young people who will use their inherent skills, talents and neighborhood know-how to bring economic vitality back to North St. Louis.

For at least 50 years, cycles of poverty have left a void that’s been filled with crime, illegal drug usage and sales, imprisonment and early deaths.

Our youth seem eager to step up to the challenge. Again, the key to success is community engagement and support.

“All the stereotypes and judgments and what the media puts out there about us doesn't feel good to my generation,” Andivar told me recently. “But when people see a difference in us other than the negative things it makes me elated. It’s like we’re really doing something in the community.

It tells me that I can be a part of something powerful. It shows me that they care about me and other youth. - Darryeon

Darryeon believes the project can grow to the point where one day it operates its own manufacturing plant. But, he adds, the challenge is on us to convince people that we’re serious:

“Yes, we can have our own land, building and our own place if we just keep doing what we’re doing. If we push harder to better the program and get our name out there, I think more people will recognize what we’re doing and help us out.”

Darryeon also stressed what it means when the larger community recognizing that he and his fellow SPP youth are trying to make positive changes:

“It tells me that I can be a part of something powerful. It shows me that they care about me and other youth.” 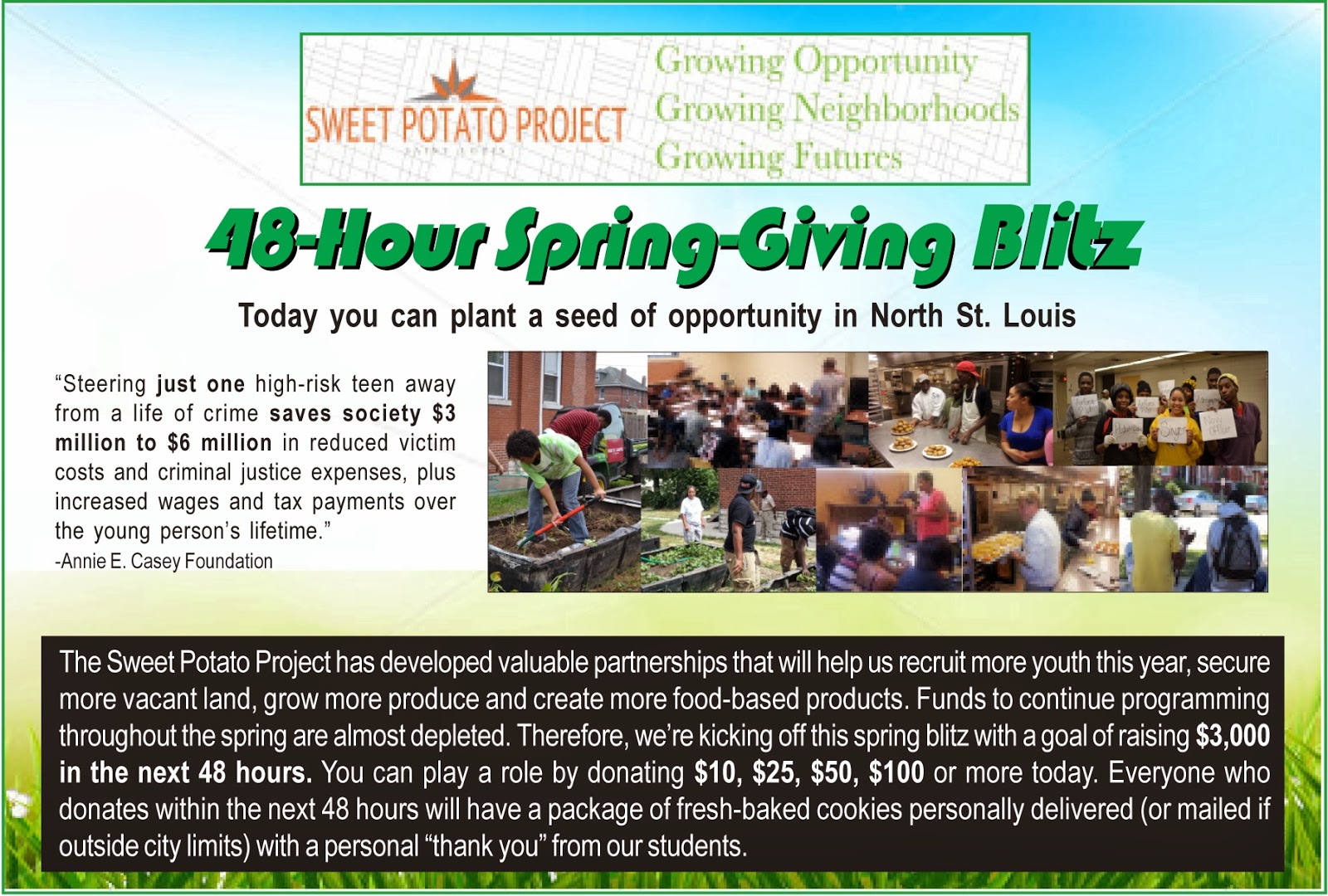 Please support the Sweet Potato Project's Spring fund-raising campaign. Click here for more information and details and  how to donate:

Posted by http://sylvesterbrownjr.blogspot.com/ at 10:52 AM No comments: Links to this post