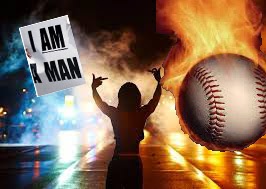 This weekend, St. Louis’ Baseball Cardinals will glow in the national media spotlight as they square off against the San Francisco Giants for the 2014 National League Championship. Internationally, however, it’s more likely the media’s attention will be focused on a city embroiled in civic unrest. Tensions have escalated in the region, partly due to the fact that Ferguson MO policeman, Darren Wilson, has yet to be charged for the fatal shooting an unarmed teenager, Michael Brown, two months ago.
Ten days after that August 9th shooting, two St. Louis City police officers gunned down a knife-wielding young man, Kajieme Powell, 25, fewer than three miles from Ferguson. Then on Oct. 8th, two days after the Cards beat the Los Angeles Dodgers in the NL Division Series, an off duty St. Louis cop shot and killed an 18-year-old teen, Vonderrit Myers, in south St. Louis.
Police, according to local media, are expecting a “hot” weekend. They’re gearing up for large and possibly violent confrontations with protesters downtown and throughout the region. Protesters, like they did at a recent Powell Symphony Hall concert, are making plans to visually and creatively disrupt, make “the comfortable uncomfortable” and generally draw the world’s attention to what they view as an out-of-control and deadly police force.
“Baseball & Blood” is an appropriate title for this weekend’s activities. Since the Ferguson shooting, race relations, political and police power has been heavily scrutinized by media from all over the world. Our region has unexplainably become the lynchpin that’s exposing the pitfalls of whites who dominate police departments in mostly all-black neighborhoods and majority white municipalities profiting off “driving while black.”
It’s because of St. Louis that politicians on Capitol Hill have held hearings on militarized police departments and we’re the reason why police chiefs are fumbling to explain inhumane and flawed policies and training. And, finally, we’re holding real conversations and having constructive dialogue about our region that’s famously known for still being segregated in the 21st Century.
It may sound callous but we should celebrate the duel monikers of “baseball & blood.” Just as the Red Birds earned their place for playing and winning hard, St. Louis deserves a thorough analysis of its hard-headed tolerance of institutionalized, discriminatory behaviors. Police officials still don’t understand that policies that result in the deaths of unarmed black men are not OK. Since the Ferguson shooting we’ve heard or seen several graphic cases nationwide of police unloading their guns or roughing up citizens for offenses as trivial as “seatbelt violations.”
There must be a reckoning for blood loss in the name of “law enforcement.” Hopefully, whites who sympathize and defend police-many who wore “I am Darren Wilson” wristbands-will understand that these sentiments fuel the “us vs. them” mentality of cops and reinforce the concept of killing without consequence.
The explosion in our region has been a long-time in the making. We need to ensure the region’s “talking heads” or the media’s appointed “leaders” do not dampen the revolutionary spirit of powerful protest and meaningful progress. As Dr. Cornel West pointed out in a recent op-ed, we are experiencing a “leader-less” movement, buoyed by youthful angst-not traditional religious or political stoic rhetoric.
The euphoria of strike-outs, stolen bases and home runs should run parallel with our support of bold protests and public acts of righteous indignation. Under the media’s glare, civic leaders and police officials will have to think about more than just the millions they’ll make off baseball. They’ll have to give serious thought before strapping their officers in military gear, rolling out the tanks, unleashing the dogs or hurling flash-bang grenades and tear gas canisters at downtown crowds.
I marvel at this particular moment in St. Louis and not because “our team” may be headed to the World Series. I’m prouder of the long-awaited mix of young, middle-aged and old, black and white and “other.” I stand in solidarity with the radicals, the religious and the regular folk defiantly bringing “people power” to the living rooms of the powerful. I am inspired by their willingness to say “no more” and risk it all in a region that’s in desperate need of holistic change.


It is with these thoughts and more that I gladly welcome this weekend’s unofficial theme of “baseball & blood.”