The Fires This Time: What's the Message? 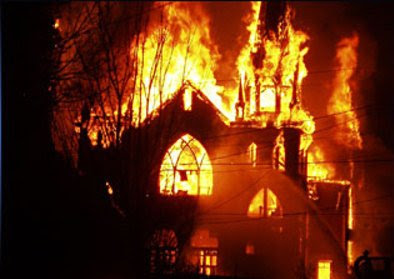 Until yesterday, six predominantly African-American churches in and around St. Louis have been set on fire. The doors of the seventh church, the 172-year-old Shrine of St. Joseph Catholic Church near downtown was set ablaze early Thursday. At this point, police and fire officials have no idea who’s behind the acts of arson. But this much we do know:
Somebody’s burning churches.
Somebody’s working hard to keep the city racially divided.
Somebody’s trying to send a message.

The latter is the point of serious reflection. What is the message? Are they burning black churches to counter the protests of those dissatisfied with police misconduct? Is someone still so upset with the election of Barack Obama and obsessed with the loony idea of “losing our country” that they’ve reverted to tactics of old? Is somebody trying to scare black people into a state of complacency? Or, is someone angry at black churches for not being loud enough; aggressive enough, engaged enough in the struggles of black people?

Is somebody trying to scare black people into a state of complacency?

We know there’s a long, ugly history of church burnings in America. The black church has long been regarded as the bastion of the civil rights struggle. Setting them ablaze was a mostly southern strategy aimed at striking fear in the hearts of resilient black people intent on gaining equal rights. Strike fear, they did but the burnings also heartened the resolve of the movement. In 1963, members of the Ku Klux Klan planted dynamite at the 16th Street Baptist Church in Birmingham, Alabama. The explosion, which Dr. Martin Luther King, Jr. described as “one of the most vicious and tragic crimes ever perpetrated against humanity" killed four young black girls and injured 22 others. It’s safe to say that whatever message the Klansmen tried to send, backfired absolutely.

Sadly and perhaps not so sadly, here we are again, some 52 years after that Birmingham church bombing, still grappling with issues of race and the retaliatory reactions to the region’s widely recognized racial divisions. It’s sad because racism is a demon that’s desperately clinging to life in our modern day metropolis. It’s not so sad because we’re still in need of reminders that all is not well in the region.

Sadly and perhaps not so sadly, here we are again, some 52 years after that Birmingham church bombing, still grappling with issues of race and the retaliatory reactions to the region’s widely recognized racial divisions.

Last year, the mostly young protesters who are being demeaned and maligned as “terrorists and antagonists” today, tried to tell us something.  They took to the streets to say “black lives matter”; that unarmed black boys and men should not be gunned down by overly aggressive police. Their actions uncovered a sordid history of municipalities that tolerates and encourages police to target, intimidate and regulate poor black people for profit. These injustices were outlined in the Department of Justice report on Ferguson. The good folks of the Ferguson Commission went further with a report detailing racial inequities and injustices that blacks have endured for decades. It was a good report, written by good people. But the report will only nudge the consciousness of “good people”…those enlightened enough, compassionate enough and engaged enough to respond accordingly.
Despite public talk and lofty commitments to enact social and economic change post-Ferguson, most city leaders are satisfied with the status quo. As a St. Louis Post-Dispatch editorial noted in August, “St. Louis has one of the highest racial-economic disparities of any major urban area in the United States.” Addressing the facts that our city ranks fifth in the nation for the ratio of black-to-white poverty, eighth in black-to-white unemployment and fourth in the ratio of black-to-white infant mortality is not a priority among the region’s elite. Building a billion dollar football stadium and putting more police downtown to protect tourists and sports fans seems to rank higher on the city’s to-do list.

In the face of naked injustices and inequities, the status quo arrogantly insists that “all lives matter” and if we don’t agree with this, well, we’re simply the racists. I love President Obama’s recent retort to this claim: “I think everybody understands all lives matter. I think the reason that the organizers used the phrase ‘Black Lives Matter’ was not because they were suggesting nobody else’s lives matter. Rather, what they were suggesting was there is a specific problem that’s happening in the African-American community that’s not happening in other communities. And that is a legitimate issue that we’ve got to address.”

In the face of naked injustices and inequities, the status quo arrogantly insists that “all lives matter” and if we don’t agree with this, well, we’re the racists.

Whatever the intended message of the arsonist, it underscores Obama’s thoughts that a “legitimate issue” must be addressed. From my perspective, the onus for real, sustainable change rest on the shoulders of the “caring and connected.” These are enlightened whites who care and compassionate, caring blacks who are also connected by DNA to black communities and those suffering within them.
Folks, we are up against historically broken systems-economic; educational and criminal justice systems that are not designed for the betterment of people of color. We live in a country that would rather herd children of color into prisons than into college. For the past 115 years in St. Louis, African Americans have been involuntarily or voluntarily excised from areas they traditionally called “home.” Most times, in the name of “opportunity” or “development” they moved or where steered into municipalities where they weren’t welcomed; where white home and business owners immediately fled and blacks were purposely locked out of the economic mainstream. As the editorial I cited above also mentioned; today’s racial problems in the region are “the product of a calculated effort over generations by St. Louis’ white majority to cut off access to opportunity for African-Americans.”
This, to be blunt, is our wake up call and should dictate our responses to the latest incidences of inflammation. We will never effectively cede poverty or crime until we empower people within poverty and crime-infested neighborhoods to make needed holistic change. A good starting point would be creating strong economic bases in these neighborhoods where poor people live.
This is, perhaps, the unwanted message that the black church needs to heed. This institution is and has always been a powerhouse of social, spiritual and political trajectory in this country.  Even though Blacks make up only 13 percent of the U.S. population, a new Nielsen study estimates that by 2019, we’re on track to represent $1.4 trillion in buying power. Now I’m not sure how much of this trickles through the wallets and purses of St. Louis’ blacks but it’s fair to say that we represent a respectable percentage and a lot of that money will wind up in the coffers of black churches on Sunday mornings.

The black church has always been a powerhouse of social, spiritual and political motivation in this country.


We can’t wait on regional leaders who have are loathed to invest in black neighborhoods. St. Louis is a city with a majority black population with a proud history and legacy but with no positive, visible representation in the media, in its tourist locales or in its neighborhoods. I love this city of my birth; therefore I can speak to its flaws. It’s a region where conservative talk dominates the airwaves and a segregationist mindset dominates corporate and civic boardrooms. The modus operandi of decision-makers is to give millions to millionaires to start projects that might provide trickle down benefits to the poor. This hasn’t worked in the past 60 years and it won’t work today.
What we need is a revolution of new, inclusive thinking and the “caring and connected” must lead this charge. This is the message I’ve been sharing a lot lately. While speaking at the Conference for Catholic Bishops in January, I answered the question of “what can whites do” to better the conditions of African Americans? My suggestion was/is: “Invest in Black. Look for ways to socially and economically empower black people where they live.”

What we need is a revolution of new, inclusive thinking and the “caring and connected” must lead this charge.

Thus is the mission of the Sweet Potato Project. For the past four years, we’ve trained youth to grow, market and sell fresh food and food-based products. This year, we are attempting to expand the vision by inviting people to lease or purchase some of the more than 8,000 vacant lots in St. Louis to grow and sell food also. If people own money-generating land in the city, they’ll have a vested interest in maintaining and protecting that land. If we grow massive amounts of food in North St. Louis, all sorts of individuals and companies (consumers, grocers, schools, bakeries, restaurants etc.) will have a vested interest in supporting the efforts of extraordinary ordinary people growing the food.
It’s no overall panacea but the food movement that’s exploded across the country gives us a real shot at addressing issues that the powers-that-be deem irrelevant. It gives us the opportunity to craft our own narrative in response to the inflammatory messages raised by church burnings. In the face of fear, we will not be deterred. In the shadow of ignorance, we will not be intimidated. We refuse to play your game, whatever it may be. No, we will unite; we will become stronger and committed to doing the work of the truly caring and committed.

Sylvester Brown, Jr., is a long-time St. Louis journalist and co-founder and Director of the Sweet Potato Project.

Posted by http://sylvesterbrownjr.blogspot.com/ at 2:25 PM No comments: