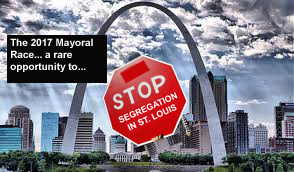 The biggest local story that wasn’t, was the news that throughout Mayor Francis Slay’s entire term the city has been re-segregating itself with public money. Thanks to a series of articles, starting with STL Magazine and followed up by the Riverfront Times, we’ve learned that politicians have exploited tax incentives and special rewards at the expense of public schools and real blighted neighborhoods. This was done to ensure the number of white residents rose in certain areas while black residents in those same neighborhoods decreased significantly. For instance, an Oct. 31st Riverfront Times (RFT) expose’ noted how politicians gave away $950,000 in tax incentives per resident to help a meager 5,000 people move into the already stable Central Corridor neighborhoods.

For me, this is the number one issue St. Louis voters must confront as they contemplate whom among the wide slate of mayoral candidates they will elect in March. Those politicians running, especially the black politicians who’ve been in office during the past 16 years must explain where they’ve been and what they’ve done to either enable or thwart attempts to re-segregate the city.  They must justify why they've supported Slay all these years and supported his agenda. How is it possible that some have signed off on bills and special tax perks that advanced downtown revitalization and investments in tony, white wards, while their constituents suffered socially, economically, and educationally?

We must determine if we’re serious about changing the trajectory of a segregated city that seems solely focused on doling out millions upon millions to already rich developers, “big box” projects and already stable neighborhoods. Throughout Slay’s four terms in office, St. Louis has been consistently ranked as “the most” or “one the most” violent cities in America.  Slay has been MIA in the fight to address poverty, black unemployment and all the other ills related to this societal cancer. Voters must decide if we’re ready to grow up and become a real inclusive metropolis that invests in all neighborhoods and all people no matter their race or class status.

Let me be upfront, St. Louis needs a black mayor. I know that statement may not sit well with many but it’s true-especially now. As it pertains to race, the biggest problem in the region isn’t really racism, it’s irrelevancy. For the most part, black people are rendered irrelevant in the city’s quest to be great.

The recent passing of talk show legend, Richard “Onion” Horton, reminded me of a time when black voices were prevalent in the local public sphere. We talked, we listened and, thus, we gathered to hold politician accountable. Missions and messages may have pissed off many but they also resonated with white listeners. With an overflow of public information, we were able to debate, organize, protest and elect candidates from a more informed position.

These days, media outlets are too eager to sacrifice diverse voices to bow to the whims of Red-state audiences. Conservative and establishment viewpoints are mainstay in the St. Louis Post-Dispatch, KMOX Radio and through other major local media outlets. After the death of Mike Brown in 2014, after all the reports of the region's racial disparities that merited balanced discourse, conservative talk show host, Jamie Allman, was awarded a show on the local ABC network affiliate. Even so-called “liberal” media outlets like the RFT and St. Louis Public Radio are devoid of independent black voices and perspectives. Other than the St. Louis American, the black-owned weekly newspaper, we are deluged 24/7 with conservative sentiments, passions and direction that bolsters establishment dogma and dilutes progressive, inclusive action.

It’s against this backdrop that we must decide the future of St. Louis. Yes, we need a black mayor but not simply because he/she happens to be black. All the candidates must be scrutinized and challenged on their records and positions. They must be pushed beyond feel-good rhetoric and knee-jerk platforms. Those who offer jobs and opportunities in North St. Louis through the crumbs that fall from such mega-million dollar soccer stadium and Ball Park Village deals need to be checked for their lack of creativity and vision.

I consider some of the candidates friends or colleagues but I’m looking to support the one who’s bold enough to articulate why it’s vital that we invest in communities that’s been ignored for the past 100 years. That candidate should be judged on his/her ability to sell voters (black, white and “other”) on the need to stem gentrification, provide balance to disproportionate public financing downtown and in all-white neighborhoods. Finally, I want to support the candidate that proves he/she will address the poverty/educational/crime/equity problems that's plagued our region for decades.

We should challenge those candidates who’ve done nothing while the city has been re-segregated under their watch. We must take those to task who are now talking “unity” after they’ve undermined or supported divisive attempts to punish their progressive colleagues who actually summoned the hutzpah to challenge Slay and/or other racially-biased, status quo politicians.

We must be wary of politicians backed by Slay or supported by his army of well-to-do donors.  To support them is to risk business as usual. I believe the recent elections of State Rep Bruce Franks (House District 78) and Rasheen Aldridge (5th Ward Committeeman) are signs of a departure from politics as usual in the city. Some black candidates are once again solely focusing on wooing white voters from the central corridor-a segment of the city that has overwhelmingly voted “white” since the late 1990s.

As noted in a 2015 nextSTL article, there’s an evolving progressive aldermanic caucus that includes candidates Megan Ellyia-Green (Ward 15), Cara Spencer (Ward 20) and Scott Ogilvie (Ward 24). These outspoken individuals have proven to be a thorn in the side of the establishment political structure. They also seem to have developed a diverse and activated cache of voters who organized and got Franks and Aldridge elected. They seem to be the engaged and activated block that’s unafraid of diversity and boldly demanding true equity.

It’s unfortunate that so many high-profile black candidates are in the mayoral race. By sheer numbers, they have given voters a difficult choice and, more than likely, ensured that the only viable white candidate will win the race.

To be blunt, the onus of real, progressive and inclusive change is in the hands of a scrutinizing and an informed electorate. The only way to thin the herd is to talk loudly and publicly about what a real, inclusive St. Louis can look like beyond sports stadiums and special perks for rich, white neighborhoods. We have a once-in-a-lifetime opportunity, folks. St. Louis can be a real, diverse, kick-ass metropolis if we can manage to break the segregated mindset of the rich and powerful who control or are controlled by the status quo.
Posted by http://sylvesterbrownjr.blogspot.com/ at 12:45 PM 12 comments: