Tomorrow’s Promise: Coming to Grips with a Challenging Decision

The election tomorrow (Tuesday, March 7th) represents a crossroads in St. Louis politics and future social and economic developments. Mayor Francis Slay’s unexpected announcement last year that he was not seeking a 5th term caught many by surprise. Slay has endorsed 28th ward Aldermen, Lyda Krewson who has the cash and influence to win the election, especially with four well-known black candidates vying for the seat. The fact that the candidates threaten to split the black vote at this crucial time is an indication of how fractured and powerless the state of local black politics has become in the city.

The fact that the candidates threaten to split the black vote at this crucial time is an indication of how fractured and powerless the state of local black politics has become.

Whatever the reason-ego or unexpected opportunity-the black candidates are challenging voters with a difficult decision. Therefore, we are obligated to challenge them and base our support on who will best take the city into a new, progressive and inclusive direction.

For me, it’s rather simple. I’m supporting the candidate who I think is aware and prepared to advance the positive momentum percolating in our city.

This new energy started brewing in mid-2014 after the police shooting of Mike Brown. Mass frustration with the callousness of black life and militarized policing shined an unwelcomed, international spotlight on the region. Journalist from outside the area questioned tolerated racial segregation and police oppression in the Gateway City and beyond. They noted how, in the name of “development” black people were purposefully pushed out of the city and into surrounding municipalities. They documented the practice of police targeting black people as human collateral to flow millions into the coffers of small, unjust municipal fiefdoms.

For me, it’s rather simple. I’m supporting the candidate who I think is aware and prepared to advance the positive momentum percolating in our city.

To the horror of the region’s power brokers, people of all colors, ages and genders braved tanks, rubber bullets, tear gas, and overly aggressive police to amplify the “black lives matter” mantra. Injustice was directly linked to the city, two months after Brown’s death, when another white policeman shot and killed another black teenager. The shooting of VonDerrit Myers Jr., in the 4100 block of Shaw Boulevard increased the intensity of an already diverse and mostly younger crowd of protesters.  On November 25th, 2014, dozens of protesters were trapped inside MoKabe’s, a coffee shop known for its “progressive” and diverse clientele. Eye witnesses stated that police in armored vehicles intentionally dropped gas canisters directly in front of the coffee house which immediately filled the building.

This new group of passionate dissidents refused to play by the old rules. In no uncertain terms, they let civil rights icons like Jesse Jackson and Al Sharpton know that they weren’t playing by their antiquated playbook. A new kind of grassroots protest included but eclipsed old traditions of mass marches and highway shutdowns. Showing up and acting out at football games, the St. Louis Symphony and other “safe zones” for the unconnected and uncaring brought attention to a city were systematized racism had been deeply embedded for decades. Colorful plywood murals on boarded-up buildings, militant and malevolent songs, the stinging lyrics of spoken word artists, and creative and resilient protests became signals of a cultural and racial revolution.

The special elections of activists Bruce Franks and Rasheen Aldridge was a direct result of “progressive” political input and influence.

Two of the leading black mayoral candidates-one an alderman, the other president  of aldermanic board-speak of unifying our divided city. Yet, it’s City Treasurer Tishaura Jones who’s been endorsed by most of the progressive south side aldermen and Bernie Sander’s followers involved with groups like Mobilize Missouri. If there is to be unity and equity, it seems Jones has recruited the people power to fulfill that promise.

Racial unity is not the only criteria for positive change in our city. We live in a region where black lives are deemed irrelevant. Accordingly, I’ve written that we need a black mayor that’s empathetic to racial disparities and capable of reversing the more than 60-year-old trend of de facto segregation.

A series of STL Magazine and Riverfront Times articles detailed a 16-year, purposeful collusion of politicians and developers to exploit tax incentives and special rewards at the expense of public schools and real blighted neighborhoods. This, a couple of the articles stressed, was done to ensure the number of white residents rose in certain areas while black residents in those same neighborhoods decreased significantly.

After reading the articles, the defining questions for me were what role did the black aldermanic candidates have in enabling, halting or exposing how public money bypassed their constituents and wound up improving majority white wards and empowering already rich developers? How could they sign off on a billion dollars in tax perks without demanding some kind of reciprocity in their own wards?

What role did the black aldermanic candidates have in enabling, halting or exposing how public money bypassed their constituents and wound up improving white wards and empowering rich developers?

I’ve listened to a few of the mayoral forums and conducted one-on-one interviews with some of the candidates. All the black candidates promise more inclusive development and racial inclusion for North St. Louis. However, in explaining the reasons why there’s been little to no real development in long-ignored areas of the city, their responses reeked of impotency. I've heard “there’s little black aldermen could do because they’re out-voted by white aldermen. Some described Slay's office as an omnipotent, elitist club that poo-poos anything that didn’t fit with the mayor's “sustainability plan” designed exclusively for downtown and the central corridor. Some of them put the blame squarely on the shoulders of developers who are hesitant to invest in North St. Louis.

These answers, to me, lack courage, vision and activism. It also highlighted an unwillingness to amalgamate the powers at-hand in the city. My organization, the Sweet Potato Project, is among a myriad of nonprofits investing our time, energy and meager resources in educating and employing young people, developing community-based food systems, building affordable homes or combating crime, poverty and hopelessness.  None of the black candidates, while in office, sought to use their clout to make sure hard-working nonprofits and small black businesses got the same love or a fraction of the resources gifted to power brokers, powerful developers and "big-box" businesses.

Again, it was Tishaura Jones who convinced me that she’s creative enough and outgoing enough to stand for racial and economic equity. She’s demonstrated the ability to beat back attacks from defenders of the status quo who have identified her as the one audacious enough to shake-up a system that’s addicted to luring big businesses to the city with lavish, unnecessary tax incentives.

St. Louis is rich with higher-learning institutions like Washington University, Harris Stowe, and St. Louis University. These halls of academia are stuffed with research, and real-life templates for the equitable use of public funds to dramatically change low-income communities. Our next mayor must be adept at collaborating with local universities and using their plans and proposals to propel the city forward. Jones is the only candidate I’ve heard who’s talked about putting the power of local universities to work on a city-wide sustainability plan.

Jones seems to be the one with the audacity to shake up a system that’s grown addicted to luring big businesses to the city with lavish, unnecessary tax incentives.

After much deliberation, I’ve thrown my support behind Jones. She seems to be the one who will galvanize the grassroots, political and people-powered progressive forces that have taken root in our city and throughout the region. The fact that she’s modernized the city’s parking system, saved millions in revenue and created programs to teach financial literacy to the poor and prepare kindergartners for college speaks to her vision. She’s demonstrated that she’s courageous enough to go anywhere to seek out and implement best practices from other locales and our home-based universities.

To be clear, it won’t upset me if any of the black candidates win the mayoral race. They’ve all spoke to the sharing of taxpayer wealth and city resources to prioritize equitable progress throughout the region. For me, it’s not just about what they will do as a newly elected mayor, it’s about what they’ve done in their respective offices to date.

It won’t upset me if any of the black candidates win the race. But it’s not about what they will do, it’s about what they’ve done in their respective offices to date.

Candidate Antonio French told me that robust voter turnout will dictate the outcome of the mayoral competition. Personally, I don’t see how a larger turnout will change the percentage of voters torn between four black contenders and one status quo white candidate, but French might be correct. But more so, I’m hoping for a massive, informed electorate that’s keenly aware of the powerful collaborations and opportunities at hand under new mayoral leadership.

We are at a crossroads, St. Louis. We have a once-in-four-year opportunity to set a new, more inclusive course for the Gateway City. Here’s hoping that the promises at hand soon becomes the fruit of our future. 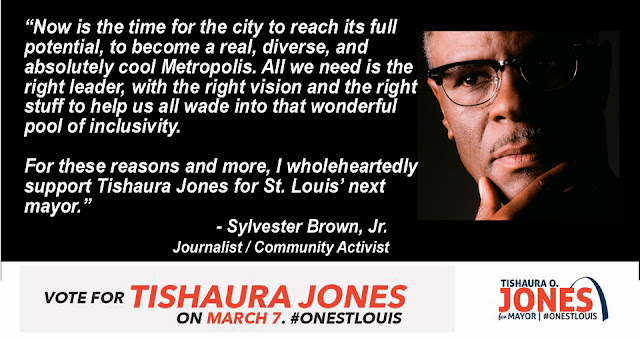 Posted by http://sylvesterbrownjr.blogspot.com/ at 4:38 PM 2 comments: