Calm within the Chaos: Reflections on Jason Stockley Protests

I am not deterred, not this time. I am emboldened by history and a sense of renewed momentum. In times of great chaos, great people, inspirational young people, will rise to the occasion. 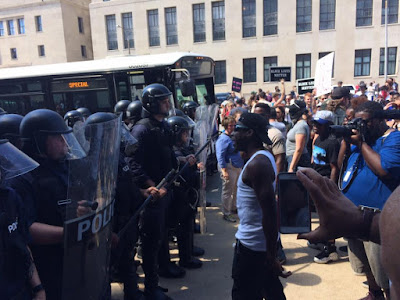 I’m experiencing a strange sense of calm and gratitude while anger and frustration boils over in our region…again.
Let me try to explain. 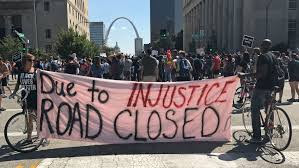 Like many others, I am furious about the acquittal of Jason Stockley, a white former St. Louis police officer charged with killing a black drug suspect, Anthony Lamar Smith, in 2011. To be blunt, it was injustice on a major scale. Once again, in the face of naked evidence – a cop with an unauthorized AK-47 is captured on tape saying he’s going to kill the fleeing suspect moments before the shooting. This cop is seen, again on tape, putting the automatic weapon in his car after putting four bullets into the suspect’s body. The cop is also seen rummaging through a duffel bag, where -“surprise, surprise”-an old, beat-up .38 revolver is produced. He claims he shot the suspect after he reached for the pistol. Yet, the only DNA on the gun was Stockley’s.

Stockley testified that his DNA was on the gun because he unloaded it as "a safety precaution." Safety for whom? Smith was already dead. Now, one would assume a judge would know police procedure. Why would a trained policeman handle evidence with his bare hands? Let's give him the benefit of the doubt. If he unloaded the bullets, where are they? Shouldn't they have been bagged for evidence. Remember, this was a revolver, bullets are loaded by hand into the chamber. Surely Smith's fingerprints would have been on the bullets...or Stockley's. 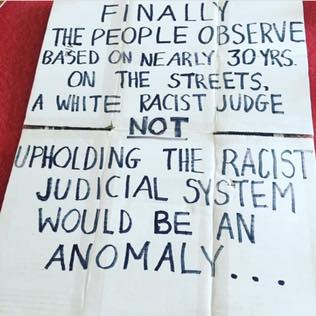 Stoking the embers of frustration even more was the long, five-year wait for some semblance of fairness. But, the dagger of injustice was shoved further into our backs by Timothy Wilson, a 70-year-old, white St. Louis Circuit Judge. While barricades were raised, while the national guard was on stand-by, the pretense of due process ended with a judge’s biased judgement. Based on his 30 years’ experience, Wilson wrote in his opinion, "…an urban heroin dealer” without a gun is “an anomaly." 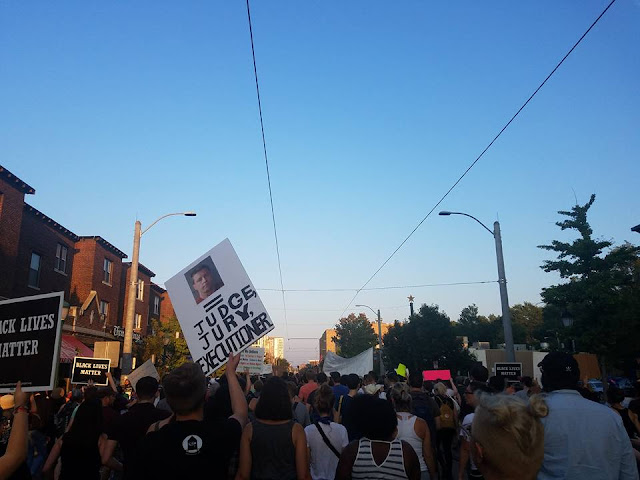 Only “urban” dealers have guns? I suppose in suburban and rural areas, where more heroin is used and sold, guns are nonexistent. Damn, even white drug dealers have unearned privilege. 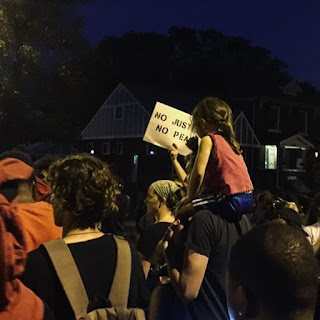 Wilson’s opinion is a carry-over from 160 years ago. That’s when United States Supreme Court Justice Roger Brooke Taney, in the 1857 Dred Scott case, ruled that blacks “had no rights which the white man was bound to respect.” Today’s version is that blacks have no rights that white police need to respect, even if it cost them their lives.
But, I digress.  My anger has subsided…a bit. It’s mainly due to the response of people-white, black, “other,” lesbian, straight, old and young. They’re all in the streets, on the highways, byways and cross-ways. They’re making the case for yet another black man slain by police.  They’re bravely shouting, “black lives matter” downtown, midtown, at suburban malls, in popular business districts, in the county and throughout the region.

“The whole damn system is guilty as hell!” 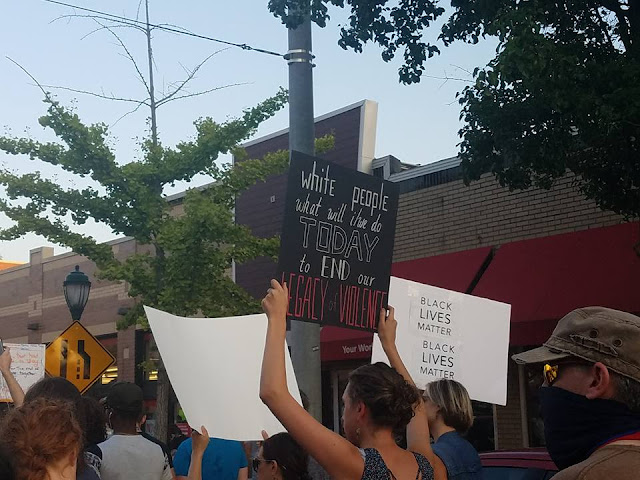 Those angry words of a protester brought it home for me.  It’s not just Stockley, it’s not just Judge Wilson, it’s not just the police department…”the whole damn system,” those who defend it, support it and those in charge of dispensing justice…are all “guilty as hell” and people, especially young people, know it and are expressing it…loudly.

“The whole damn system is guilty as hell!”

My sense of calm comes from a thread that connects back to the 2014 shooting of Mike Brown and the ensuing protests that influenced the nation.  That singular incident inspired and galvanized millions. It put police brutality and oppression under a world-wide spotlight and made body cameras a norm in police departments throughout the country. It reverberated in the campaign of Bernie Sanders, who also preached tearing down the whole damn “system” and starting over. It birthed a progressive movement in St. Louis politics that produced young new candidates like State Rep. Bruce Franks and Alderman John C. Muhammad (21st ward) and further solidified the reputations of “progressive” elected officials like Alderwoman Megan Ellyia Green and mayoral candidate and City Treasurer Tishaura Jones. All these folks and their constituents have been out in the streets.

The progressive fire wasn’t doused after the election of Donald Trump, a man who’s as adept as Hitler in using racism, patriotism, division and hatred to propel a paranoid racist, selfish and self-centered agenda. Although he’s emboldened angry white voters, white nationalists, Neo Nazi’s and white supremacists, this backwards movement has been countered by activated, engaged, outspoken, and again, a racially-mixed opposition of mostly young people.
Therein lies my sense of gratitude and hope. History has shown that young people have always been right when they choose to fight.  Young people and student “radicalism” in the 1960s and ‘70s were the catalytic weapons used to challenge the Vietnam War and overt, systematized racism. It was the battering ram for civil rights, human rights, voting rights, free speech, protecting the environment, defending women’s liberation and standing up for gay and lesbian rights.
I am not underestimating the seriousness of our times. I recognize the forces at play and the power of propaganda. I understand the mainstream media’s agenda to emphasize the bad examples of a destructive few, while attempting to dilute the power and actions of thousands who protest peacefully, defend property and lives diligently, who stand for humanity.  The trolls, the "Trumpettes," the race-baiters and Nazi-lovers will use video footage of stereotypes and angry black people to stoke the paranoid base.

I am not underestimating the seriousness of our times. I recognize the forces at play and the power of propaganda.

Like in 2014, we’ve experienced yet another grave, systematic injustice. And, as it was back then, there will be loud, angry and, yes, destructive opposition. Change ain’t always pretty. Least we not forget, destruction in the form of violent and disruptive revolution is an American tradition. Let us not forget the destructive Boston Tea Party incident that preceded the Revolutionary War. Additionally, there would be no labor unions today if not for the thousands upon thousands of violent protests from 1886 up to modern times where a reported 8,800 acts of violence happened between 1975 and 2011 alone.
I’m in no way condoning violence or the destruction of property. I only mention these events to correct the naive notion that change comes without consequences. If thousands are protesting, there will be a few knuckleheads, opportunists and anarchists stirring up trouble. However, they do not represent the movement and shouldn't be portrayed as such.

In times of great chaos, great people, inspirational young people, will rise to the occasion.

In summary, I am not deterred, not this time. I am emboldened by history and a sense of renewed momentum. In times of great chaos, great people, inspirational young people, will rise to the occasion. And, St. Louis is no exception.  Once again, the universe, with all its confusing, convoluting and crazy machinations has tossed down the gauntlet of challenge. And, once again, brave young people, mostly, have chosen to respond to this clarion call. Once again, we’re at a crossroad in America. What I am witnessing today in the streets of our region is a reminder that we shall overcome…again.

Posted by http://sylvesterbrownjr.blogspot.com/ at 5:30 PM 3 comments: