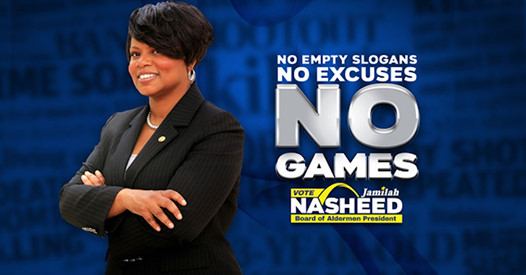 On Tuesday, voters will decide who will be our next president of the St. Louis Board of Aldermen. I haven’t seen this much energy, money and excitement about this race since the city’s first black mayor, Freeman Bosley, Jr., endorsed south city alderman, Francis R. Slay for the seat in 1994. It was a monumental moment in local politics because the mayor was an African-American, the comptroller, Virvus Jones, was African-American and two black women, Sharon Tyus (D-21st) and Ald. Velma Bailey (D-19th) were also seeking the president of the board seat.
To put it mildly, white political and civic leaders freaked out. Having all three seats of the powerful board of Estimate & Apportionment (E&A) board headed by black people was simply unfathomable. To have black people calling the shots on how city money would be distributed was something that had to be halted by any means necessary.
I am absolutely ga-ga over the fact that so much interest has been generated about this prez-of-the-board race. To me, it’s a referendum, maybe even a reboot, of a local political system that’s been co-opted by the rich and compromised by the fear of black power in the city. Odd as it may be, this particular race will either represent a continuation of or a realigning of the city’s priorities. 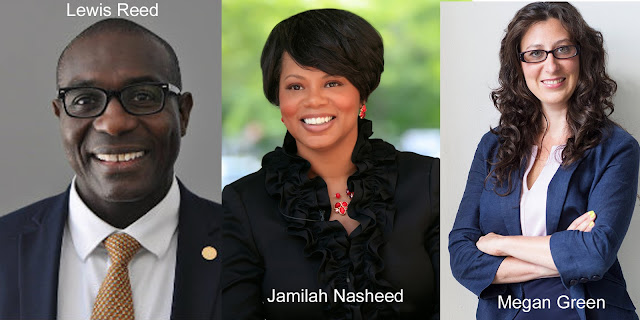 Since the police shooting of Mike Brown in 2014, the Bernie Sanders movement of  2016 and Tishaura Jones’ bid for mayor in 2017, younger people have become actively engaged, as candidates and as voters. Candidates have spearheaded new and robust ways through social media and old-fashioned face-to-face meetings to inform and activate voters. I sense a mighty trajectory of change that’s destined to challenge the stealth, stubborn, stoic and, dare I say, racist, mode of political operations by the status quo.
But let;s be clear: This old guard, the establishment, elitist political and civic oligarchs have no intention of going quietly into the night. The “empire” has consistently struck back with well-funded campaigns that’s less about “race” and more about racial irrelevancy.
From a historical perspective, city leaders have yet to recover from the exodus of almost 500,000 people (mostly white) from the city between 1950 and 1990. Based on the paranoid belief that blacks (black crime, black poverty, black politics, black people) are the root causes of our population loss, the powerful and privileged have mounted race-based campaigns ranging from ward redistricting, ward reduction to the current “Better Together” merger proposition. By many accounts, this particular scheme will basically strip black elected officials of any say in a city with an almost majority black population.

This model of city governance, current and transitional, serves as my major motivation in Tuesday’s elections. My choice for president of the board is based on who, among the three top candidates-Lewis Reed, Megan Green or Jamilah Nasheed-has the juice to preserve and increase black political power in the city. Secondly, it's about who will put the brakes on the power brokers’ intent to dissipate that power. Other issues: development in long-ignored black neighborhoods, commiserate political representation, and push-back against privatization-are all connected to these concerns.
Lewis Reed, the current president of the board, gets the most scrutiny from me. He’s been in that position for 11 years, but I’ve yet to see him exhibit the same leadership, dedication, drive or enthusiastic support for development in North St. Louis that he has for baseball or soccer stadiums, high-end developments downtown or the Central Corridor, airport privatization or the current effort to merge the city and county.
Reed has been endorsed by the St. Louis Post-Dispatch, the propaganda piece for the whims of the rich & culturally-clueless. He also has the blessings of Mayor Lyda Krewson, former Mayor’s Slay’s hand-picked czar of take-back politics.
As the St. Louis American noted in its Feb. 28th article, white democratic conservatives like Aldermen Joe Vaccaro, Beth Murphy and Joe Roddy have also endorsed Reed. According the article, it’s “telling” and time for serious change when representatives of old, biased thinking believe Reed best protects their interests. For me, I just think Reed has gotten far too comfortable with old thinking and establishment money.
If Megan Green wasn’t who she is, she’d probably have my support. Green has already demonstrated that she’s willing to rock the boats of rich, influential elites and the politicians they unceremoniously fund. She has stood for integrity, transparency, equity and voter input on issues like airport privatization. Green has the support of a diverse group of residents and grassroots organizations. I’m also impressed that she’s a young and unafraid female politician.
My problem with Megan, isn’t Megan. It’s the fact that her victory will jeopardize the racial make-up of the E&A board at a time when the stakes are too high, and the black political machine’s engine is just now sputtering anew. Besides, we must view this new wave of progressive, local politics with caution. Yes, white progressives have challenged docile, go-along-white conservative Democrats. But I’ve yet to see any sign of “progressive” collaboration with black aldermen.  White progressives are cool and all but, honestly, when confronted by what many consider “uncompromising” black leaders, they tend to be just as conservative as conservatives. Many act as if they know what’s best for black people without embracing, consulting or collaborating with their black colleagues.
To be frank, I’m looking for a resurgence of creative, strong black leadership in the city. I like the energy and innovative thinking of young aldermen like John Muhammad (D-21st) and Brandon Bosley (D-3rd Ward). A great addition to the board will be the Rev. Darryl Gray, a candidate for alderman in the 18th Ward. I believe Gray, a well-known and seasoned activist and humanitarian, has the bonafides to help bond some of the broken pieces that divide the current board of aldermen.

I want an uncompromising president of the board who recognizes the untapped potential in this city; someone who can rally, inspire and motivate the diverse board of aldermen to use their collective power to invest city resources into long-ignored neighborhoods and people that the power-brokers have deemed irrelevant.
Bosley and Muhammad have already instigated a recall of Krewson based on the belief that she’s a sell-out for backing a proposal that will render the city impotent in determining its own destiny. No doubt, Krewson will survive the recall but it will remain a stain on her record for years to come and a rallying cry for a displaced people.
I’m taking a long-range view with this upcoming race. Treasurer, Tishaura Jones has already intimated that she will again seek the seat she lost in 2017 due to the arrogance and egos of black candidates who basically handed the race to Krewson. Personally, I maintain that their crimes of pride and ignorance should not go unpunished.
So, let’s say push-back from locals and county municipalities that want no part of the city due to its over-hyped negative perceptions, dooms this merger proposition. What if Jones wins the next mayoral contest? Her endorsement of State Senator Jamilah Nasheed heavily influenced my decision to also back the candidate. Jones as mayor and Nasheed as head of the aldermanic board means two, maybe three (with Comptroller Darlene Green) independent, influential black women in control of how city resources will be distributed. This will represent a huge and much-needed blow to the cadre of powerful individuals, like former Mayor Slay, who are doggedly determined to privatize everything and strip the city of its prominence, potential and power.
For these reasons and more, I’m hoping Nasheed wins this race. Is she perfect? No. But, of the three top contenders, I think she’s our best shot. Again, turning to the American’s commentary about Nasheed...“we have a candidate – born and bred in North St. Louis – whom we know very well and have known for decades.”
Nasheed, I hope, won’t be tethered to the whims of rich, local dictators. Yes, like Reed, some have contributed to her campaign, but she’s also voted against their interests, as the American article stressed. The bottom line is that Nasheed will be accountable to a largely grassroots base, she will also be held accountable by Jones, by the people, by me. Of course, the same can be said about Megan Green but not about Reed. If Green wins, I will shed no tears, but I’ll quietly worry about the path of black political progress.
Folks, despite what the naysayers say and do, we’re onto something here in St. Louis. Everything we need to reduce crime, build safer, stronger communities and empower young people is within our grasp. We simply have to believe in ourselves and our collective capabilities. St. Louis doesn’t need to merge with the county to be great. We can be great by developing our own culturally-rich identity like New Orleans or Atlanta. We can be great by rejecting race-based fears and investing in organizations like Better Family Life, the Urban League, Beloved Streets and projects like mine that use agriculture and the selling of fresh food and food-based products to fuel an economic engine in North St. Louis. Just as St. Louis has created a worldwide template for effective protests, we can attract positive press and acclaim by transforming troubled neighborhoods into possible black Meccas.
We must aggressively address the decades-old, backwards status quo mindset that “black” is bad. Now is not the time to backslide, we have much work to do. We must convince the divided but diverse masses that investing in black communities and empowering black people is not a threat to white people or white neighborhoods. It’s a solid investment in our city, our people, our children and our future.
We can be great by finally, finally making black St. Louis relevant again.
That said, on Tuesday, March 5th, join me in electing Jamilah Nasheed president of the board of Aldermen.

Posted by http://sylvesterbrownjr.blogspot.com/ at 7:50 AM No comments: Links to this post