We’ve Been Here Before: And That’s What’s So Damn Scary 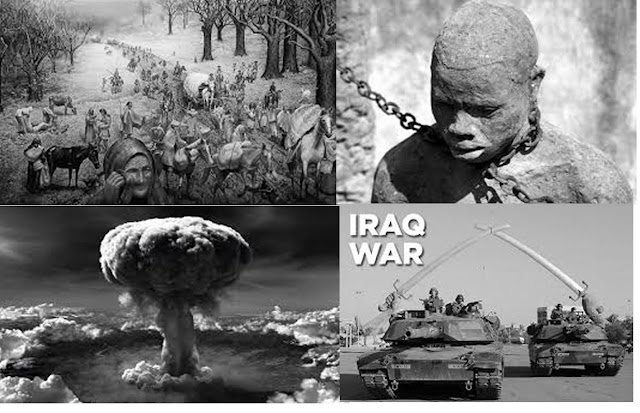 We’re in a global pandemic. Names of the dead or dying scroll across our news feeds daily like the New York Stock Exchange's ticker tape. Because of the government's ineptitude in handling the virus, many now ask just how low can this country go? President Donald J. Trump makes it easy for us to blame him; He’s so uninformed, so untruthful, so arrogant and so damn narcissistic he invites criticism.
For me though, as a researcher, writer and consummate observer, I can’t escape a historical truth: America has been here before. And that, my friends, is what’s so down right bone-chilling.
I don’t have the luxury to support the simplistic “Make America Great Again” mantra. Unlike so many others, I must flip through the Rolodex of history to decipher if such a time ever existed. Were we “great” when we erased millions of Native Americans from their native land? Were we magnificent during the 400 years of slavery and legalized oppression? Was it our shining moment when we dropped atomic bombs on Hiroshima and Nagasaki, killing more than 100,000 people? Was our response to the 2001 terrorist attacks wonderful? Brown University’s “Costs of War Project” conservatively estimates that at least 480,000 people (244,000 of which were civilians) died in the U.S.- led wars in Iraq, Afghanistan, and Pakistan.

In the sphere of collective short term memory, it’s convenient to believe that thousands of immigrant kids separated from their parents and locked in cages; that alliances with foreign governments to sully our electoral process; that the shredding of the Constitution; being a deathly stupid leader during a global health crisis and, now, willing to sacrifice human lives for the economy-represents a new political low.

For me though...I can’t escape a historical truth: America has been here before. And that, my friends, is what’s so down right bone-chilling.

Sadly, it does not. It represents an American reality: Due to feelings of white superiority, exceptionalism, patriotism, fear and prejudice, Americans will tolerate, excuse and justify just about anything. This is indicative in polling data showing Trump’s approval numbers are at an all-time high.  Despite daily, televised examples of his incompetence, pettiness, corporate avarice and disdain for non-billionaires, 50% of Americans love what he does.

Due to feelings of white superiority, exceptionalism, patriotism, fear and prejudice, Americans will tolerate, excuse and justify just about anything.

And that’s what’s so scary. Our “new normal” is old social, cultural and political American standards. We, as a country, have revisited our dark place. We’ve allowed FOX News, the election of our first black president, the myths of marauding, raping, lawless immigrants and left-leaning media bias malarkey to put us in a Nazi-like state. Like Hitler, Trump. the creative con man, backed by an army of obliging minions, has simply swooped in and propagandized our fears.

We have revisited our dark place

We now exist in a bizarre environment where it’s not political suicide to publicly speak of letting old people die so corporations can thrive.  It’s a surreal time, in the wake of the powerful #MeToo movement, when a candidate who bragged about grabbing women by their genitalia is in office, idolized by evangelicals and supported by half the populace. Suddenly, it’s a badge of honor when a tyrant demands praise before releasing life-saving medical supplies and equipment when Americans are sick and dying.
We’re in a terrifying place and not just because of the coronavirus. We’re suffering from the pandemic of justified, collective, selfish ignorance. We’re once again at a crossroad.  We’re in that familiar, deadly space where real, live people can be exiled, annihilated, ostracized and tossed aside for the greater good of corporate greed.

We’re in a terrifying place and not just because of the coronavirus. We’re suffering from the pandemic of justified, collective, selfish ignorance.

Trump is but a glaring symptom of a metastasized societal cancer. He ravages because we’ve willingly fed off poison for decades. Because we live in “the now” and have not learned from our collective mistakes, the proverbial ball is in court and the “new low” has yet to be determined.
And that is what’s so damn frightening.

Sylvester Brown, Jr. is a former columnist for the St. Louis Post-Dispatch, founder of the Sweet Potato Project, an entrepreneurial program for urban youth and author of  “When We Listen: Recognizing the Potential of Urban Youth.”

Posted by http://sylvesterbrownjr.blogspot.com/ at 8:56 AM No comments: