O'Reilly at Sharpton’s Conference: "We pretty much dropped that race stuff after 9/11" 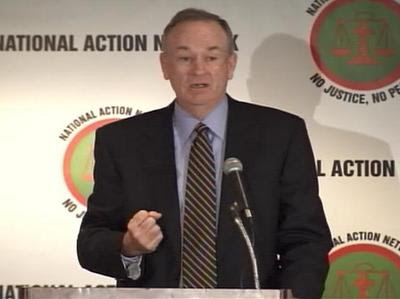 “It’s a much more interesting country America, if we stop with the race business. I mean, I’m not black, so I don’t know your struggle … and you don’t know my struggle, alright, because you’re not white.” The O'Reilly Factor host earned himself a noticeable round of boos after explaining how Americans “pretty much dropped that race stuff,” when we rallied after the 9/11 terrorist attacks. 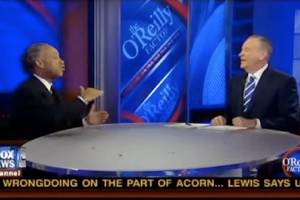 ( O'Reilly asks Sharpton to explain why he was booed at the event: Click Here )

O’Reilly, is trapped in his own spin zone if he thinks the so-called “race business” has disappeared after 2001. Wasn’t this the same guy who, while hosting an inner-city charity fundraiser in 2003 (click here for more), jokingly asked if the black performers were out in the parking lot “stealing our hubcaps."

The “race stuff” wasn’t over in 2005 when O’Reilly claimed that many of the poor “thugs” in New Orleans failed to evacuate before Hurricane Katrina because "they were drug-addicted" and "weren't going to get turned off from their source." And wasn’t it O’Reilly who found himself thunderstruck by the nonexistence of uncivil, expletive-hurling black folk when he visited Sylvia’s, a famous Harlem restaurant? That O’Reilly jewel was covered by Media Matters for America (Click here for story):

Bill O'Reilly: "I couldn't get over the fact that there was no difference between Sylvia's restaurant and any other restaurant in New York City. I mean, it was exactly the same, even though it's run by blacks, primarily black patron-ship." Later, during a discussion with National Public Radio senior correspondent and Fox News contributor Juan Williams about the effect of rap on culture, O'Reilly asserted: "There wasn't one person in Sylvia's who was screaming, 'M-Fer, I want more iced tea.' You know, I mean, everybody was -- it was like going into an Italian restaurant in an all-white suburb in the sense of people were sitting there, and they were ordering and having fun. And there wasn't any kind of craziness at all."

If the “race business” was over in 2001, why was O’Reilly obsessed with Michael Jackson’s skin color in 2009? Even before he was buried, O’Reilly insisted the pop star was unworthy of black adulation because he “bleached his own skin” and allowed “white men to provide existence for his in-vitro children.”

I’m not sure if Sharpton’s black audience or O’Reilly himself understands the white “struggles” he mentioned on stage. I am convinced, however, that the audience, like other blacks across the country knows that “race” still plays a role in the disproportionate black poverty, unemployment, drop-out and death rates from treatable diseases. It is the reason why so many unarmed black men are shot dead by police officers and why there are more young black men in the nation’s prisons than its colleges.

There are heavy doses of arrogance poured into O’Reilly’s spin cycle. It’s the only rational for the grandiose illusion of a race-baiter trying to convince black people that the “race stuff” is over.
Posted by http://sylvesterbrownjr.blogspot.com/ at 9:42 PM No comments: Links to this post