Back to My Roots

How a political whippersnapper reinforced my mission

by Sylvester Brown, Jr.
From the June edition of The Northsider
For years, I considered Antonio French my protégé of sorts. I’m about 20 years older than the 21st Ward Alderman.  I ended the publication I started in 1987; Take Five Magazine, a few months before I was offered a job with the St. Louis Post-Dispatch in 2003. It broke my heart to kill “the baby” my wife, Victoria and I nurtured for almost 16 years.  But it was time.  With two young girls, we could no longer endure the challenges or the mounting debt associated with the struggling monthly magazine.


Yet, I will never forget that I honed my craft, worked with great writers and was gifted with the ongoing loyalty of many, many in St. Louis who tried to support us and faithfully read the magazine.


At the time, French was operating his fledgling publication, Pub Def. It had the same bold, take-no-prisoners, stand-for-truth and the “little guy” flavor as Take Five.  I was touched that French acknowledged me as an influence when he called to tell me that he intended to carry on our journalistic battle in the black community in print and online.


Fast forward eight years, and there I was talking to French about writing for “The Northsider,” the monthly newspaper published by the ACTS partnership, a community-based development organization in the 21st Ward.  I gave French a litany of reasons why I couldn’t write for the newspaper:  It couldn’t pay me a fraction of what I had made as a columnist with the Post-Dispatch. Nor could it match what I was making after losing my columnist gig. In 2009, I went to work as a researcher and consultant with SmileyBooks in New York, owned by TV and radio commentator, Tavis Smiley.


As if talking to myself, French still insisted I apply for the Northsider writer position.


“You need to get back to your roots.,“ he said matter-of-factly.


Protégé or not, just who did this young whippersnapper think he was talking to? A part of me took umbrage to his comment.  Why, didn’t he know I was the black go-to guy at the Post?  I worked for a book company that published the work of black visionaries and “big thinkers” like Cornel West, Tom Burrell, Iyanla Vanzant and Smiley. I was well in touch with my roots, thank you very much.


Turns out, French was right.


Take Five’s readership was 95 percent black. The Post-Dispatch operates under a flipped demographic. I may have been the go-to-guy on all things black but my job, for the most part, transcended race.  Still, I truly value my time at the Post. My colleagues and certain editors helped me become a better writer and storyteller. I received national recognition and earned a diverse group of friends and readers who I would never have met through the pages of Take Five Magazine.


My departure from the Post—as unsavory as it was- came at the right time. Unbeknownst to me, my years with the daily had taken a heavy toll.  Little chunks of my spirit had been chipped away as I fought with editors who didn’t seem to respect or couldn’t accurately reflect the feelings or concerns of minorities in their newspaper.  It was also a drain deconstructing stereotypes and writing about “black problems” while feeling utterly impotent in addressing them.


The Northsider was exactly what I need at this juncture of my life.


Around the same time I had talked to French about the Northsider, I had established When We Dream Together, a nonprofit dedicated to delivering the inspiration, information and resources so that everyday people can be empowered to reclaim and revitalize urban areas.


Years ago, I established Take Five to inform and inspire my community. The magazine didn’t just report problems and challenges. We sponsored lectures and forums and hosted weekend bus tours to take people shopping with struggling black-owned businesses. We believed in the inherent potential of the black community and tirelessly worked to nurture and mold it for progressive change.


This month, I will officially launch a new grassroots endeavor.  I do so inspired by my role with the Northsider.  No longer do I write in rote response to tragic events or negative headlines. The faces I’ve seen and stories I‘ve heard are reminiscent of my youth and days as a publisher. Today, I live beyond stereotypes where resilient people make miracles with limited resources. In the 21st Ward alone, I see rebirth and folk of all colors, class and economic means work to reclaim a troubled community.


Most important, I see what dreams may come if we empower the powerless,  roll up our sleeves and invest the resources, energy and our hearts in these long-ignored areas.

Life is strange. I am back in that precarious but thrilling place of 24 years ago. It feels right.  And thanks to a young whippersnapper and a small North side newspaper, I am right back to my roots.
Sylvester Brown Jr., is a senior writer for the Northsider and founder of When We Dream Together, Inc., an agency dedicated to urban revitalization.
Posted by http://sylvesterbrownjr.blogspot.com/ at 11:19 AM 4 comments:

"Reduce Recidivism and Eliminate Barriers to Employment” A plan with promise

Otis Rolley Details Plans to Increase Employment and Reduce Crime by Targeting Recidivism
I don't know anything about Baltimore mayoral candidate, Otis Rolley, but I like his plan to increase employment and reduce crime by targeting recidivism. Rolley wants to create a tax credit for companies that hire ex-offenders or support organizations that do. Although the focus on major companies instead of building and/or supporting small community-based businesses that offer ex-offender support, I like where he's heading and feel there's the possibility of implementation in the St. Louis region. Like Otis points out, instead of spending $26,000 to "incarcerate an inmate annually," redirect that money toward more positive outcomes. -- SBJ

Read more about the “The Rolley Plan to Reduce Recidivism and Eliminate Barriers to Employment” here:

Posted by http://sylvesterbrownjr.blogspot.com/ at 8:39 PM No comments:

It's Official: Tavis to host When We Dream Together Fundraiser 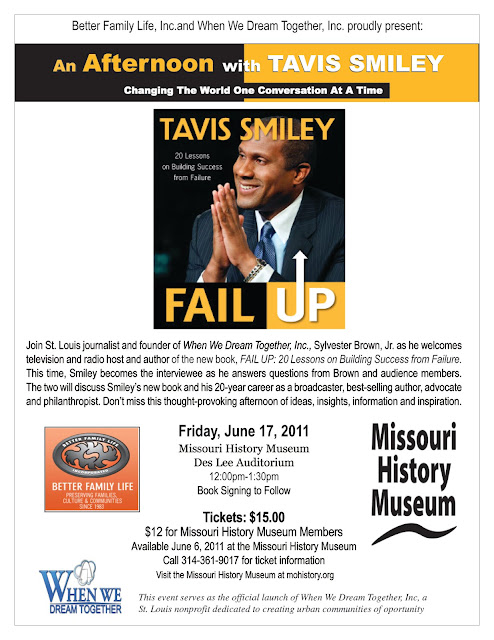 Posted by http://sylvesterbrownjr.blogspot.com/ at 7:52 AM No comments: