A conversation with Alderman Charles Quincy Troupe is like a college history course on regional politics. With more than 41 years experience as an elected official, Troupe has seen the pendulum of power swing in different directions. With history as his barometer, the former state legislator and current aldermen of the 1st Ward, argues that now, more than ever, is a critical time to halt an agenda, led by the current mayor of St. Louis, aimed at snatching north St. Louis land and empowering already rich developers.

First elected to the House of Representatives in 1978, Troupe has served or chaired many influential committees including appropriations/social services, health facilities review, commerce and economic development. In 1994, he we was appointed by President Clinton to serve on the Presidential Advisory Council on HIV/AIDS (PACHA).

Many of his battles in the House were against what he considered discrimination against the rural and urban poor.

After being forced out of his seat due to term limits, Troupe ran and won the aldermanic seat. His first order of business, he said, was to help strengthen the Black Aldermanic Caucus.

“For the first three months after I was elected, I just listened. All the Black Caucus had was a copy of the black agenda, there were no incorporation papers,” said Troupe. He was instrumental in getting the caucus set up as a legitimate non-profit with its own foundation.

Their first test as a collaborative came with last year’s redistricting effort. In 2002, a ward map secretly drafted by Mayor Francis Slay, resulted in the dismantling of the 20th Ward, the city’s largest voting black ward.

This time, despite another Slay effort to condense black wards, the Black Caucus, according to Troupe, bit back. 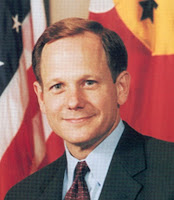 In 2002, a ward map secretly drafted by Mayor Francis Slay, resulted in the dismantling of the 20th Ward, the city’s largest voting black ward.


“We demonstrated that the caucus was strong and serious and weren’t giving up anything,” he said.

It’s a short-term victory, Troupe insists, if the Caucus doesn’t stick together and if Mayor Slay wins another term in office.

“They have all those rich people living downtown and they didn’t get their ward. And some developers don’t like the idea that they have to go through all these black aldermen to get what they want. They have all these billion dollar developments that are going through wards run by black aldermen without any real, strong minority or women inclusion. But the Black Aldermanic Caucus is stronger now and ready to challenge these exclusionary developments.”

It’s all about land mass and power, Troupe insists.

“Think about it; where’s the land for development? It’s all north of Market Street, downtown. So who’s the target; Black aldermen. That’s why it’s so critical that we keep control of the land. If you control the land, you control the destiny of the city.”

Troupe said that he wasn’t going to seek another term but changed his mind after fellow Caucus members convinced the 77 year-old statesman that their work was not complete.

“Think about it; where’s the land for development? It’s all north of Market Street, downtown. So who’s the target; Black aldermen. That’s why it’s so critical that we keep control of the land. If you control the land, you control the destiny of the city.”

One thing weighing heavy on Troupe’s mind is what is going on in Washington. Unless it’s resolved through Congress, mandatory federal cuts will be enacted through the sequestration process in March.
This means more poor people will receive less government help and services in our region. For Troupe, this means now more than every is the time for a new direction from Room 200 in City Hall.

“At this point and juncture we need someone other than Slay as the mayor of St. Louis,” Troupe says. “And the only viable choice is Lewis Reed.”

“We need this more than we need anything on a local level. We better have somebody in office with compassion and sensitivity. Right now, we have a mayor who can’t even appoint a qualified health director to address the city’s health crisis.”

“Re-gentrification is real in this city. The mayor’s office controls all the agencies in charge of development and they want this land. If you look at all the major TIF funding, there’s none in north St. Louis, except for McKee’s development downtown. Ninety percent of the TIFS are downtown and south of Martin Luther King Blvd.”

Re-gentrification is real in this city. The mayor’s office controls all the agencies in charge of development and they want this land.

The revised Black Aldermanic Caucus has gone through its infancy and was able to get through redistricting without losing any of its wards. Now, with continued focus on equitable development, Charles Quincy Troupe, the elder statesman and historian, hopes to be witness when the pendulum of power swings back towards true empowerment.
Posted by http://sylvesterbrownjr.blogspot.com/ at 8:56 AM